Review of Hi-De-Hi at The Deco, Northampton 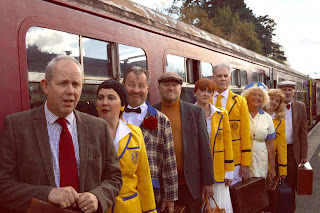 I was a fan of Hi-De-Hi in the eighties and in actual fact a fan of many of those very much of their time comedies. Hi-De-Hi was a bright and breezy and overly familiar show having ended up at many a holiday in the Maplins equivalent of Butlins, albeit not the fifties setting, but with very little changed in the decades anyway. However, we have moved on a bit since these eighties days, so does Croft and Perry's comedy still cut the mustard now?

The answer is yes and no, a lot of the humour is still fun and there are many a chuckle moments, the characters also are still bold and fun enough to provide some great entertainment. However, with these characters lie the first problem with an acting group doing a show like this. Anyone familiar with the show and its nine series run will have the characters so indelibly marked in their head and this offers no freedom for a performer to make that character their own, they are just setting out to copy someone. Yes, a challenge, and where it goes right, like with the exceptional recreation of Peggy by Victoria Miles and Gladys by Kate Billingham, there are no grounds for complaint. However, they are just recreating the performances of Sue Pollard and Ruth Madoc rather than being Peggy and Gladys of their own doing.

Elsewhere the eminently watchable Fraser Haines once again triumphs as Jeffrey Fairbrother, managing a little to get out of the shadow of Simon Cadell and play it his own way, but that is more how the character is written rather than how it was performed, his timing is as always exceptional. Likewise Bernie Wood and Martin Williams make a quite perfect combination of the hoity-toity Yvonne and Barry Stuart-Hargreaves. 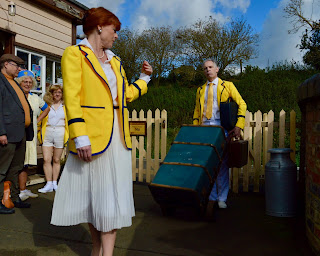 There were two slightly disappointing performances from me though, Richard Jordan as Ted Bovis didn't bring much of the bold as brass nature of this vitally important role to the stage, and timing, so key to this kind of comedy, was out much of the time. It was such a shame, as Richard is an excellent talent and I have never been disappointed by him before, however for me, I personally think as Ted he was miscast, and just didn't feel confident in the role. Also below the required energy level of the character requirements was Ed Toone as Spike, such an incredibly enthusiastic character in the show, he was I am genuinely disappointed to say, upstaged by his costumes.

The stage show itself is quite frankly at times a little lame, and surprisingly so with such a wealth of material to plunder from. The storylines chose, Ted's wife seeking alimony and the choosing of the best lady yellow coat would hardly have fleshed out a thirty-minute episode, nevermind a full stage show. In fact, perhaps the best part of proceedings is when the story is abandoned altogether at the start of the second act, and the fabulous performers of White Cobra finally get to sink their teeth into some often actually entertaining material.

Staging is fine if a little repetitive in the musical numbers and there is the genuinely curious decision to make Jeffrey Fairbrother's office, where many of the scenes occur at the far side of the stage, partially hidden behind the musical performers (the quite brilliant Rod Iliffe and Brendan J Rayner) for a good part of the audience. Often scenes open in this office, so the audience awaits the great sweeping curtains to finally reach the location when the action awaits to begin. Very odd.

It is at the end of the day a curious choice for White Cobra, although running with something like this with a large cast and potentially high appeal, is perhaps obvious financially. However for me, it doesn't quite work and while it looks truly fabulous (amazing costumes sourced) and is well performed, on the vast stage of The Deco, it does even with a cast of fourteen, look overwhelmed at times by the venue. For all my issues with their last performance, Dizzy Boo, I frankly would happily have seen something like that again over something that you could simply watch on a box set or on some channel on Freeview at any time of your choosing. Hi-De-Hi is a little old hat now and White Cobra should not only be being more ambitious in their selections but also there is no question that their talent also deserves better.

Hi-De-Hi ran from Wednesday 1st to Saturday 4th November 2017 at The Deco, Northampton. For details of White Cobra visit: http://www.whitecobraproductions.co.uk/

For full details about The Deco visit their website at http://thedeco.co.uk/ 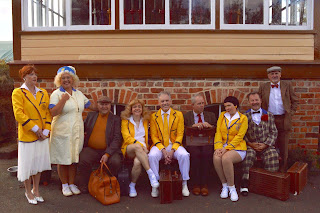