Review of The Wizard Of Oz by the Northampton Musical Theatre Company at Royal & Derngate (Derngate), Northampton 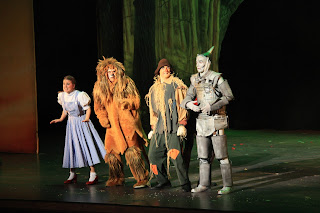 The last couple of shows from the award-winning Northampton Musical Theatre Company has been a slightly mixed bag, with their last show at Derngate the rather difficult to get a grip on thrills of Grease, a woefully inferior stage version of the classic film despite being very well performed. Their best show recently was ironically Summer Holiday, hidden at the much smaller Cripps venue. Therefore still in the wake of the exceptional Sister Act, does The Wizard of Oz create the Derngate magic once again?

The answer for me, is both yes and no, it is as always an exceptional production filled from top to tail with talent, as NMTC is so renowned for, and packing the audience in and thrilling them like perhaps nothing like Oz can in the musical department, you cannot question its selection really. However, like Grease, and to readjust a requote, "it's just Oz". This time I use it in the way that Oz is just a little over-familiar, I am desperate for the buzz that I got from Sister Act once again. 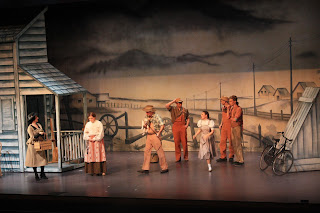 Having said all this negativity, I must comment here that I did really find the show a tremendous amount of fun, it's true that before we actually get to Oz, it's a little un-thrilling, and if I had seen another second of that filmed storm sequence, I might have blown up myself, but otherwise it really is an exceptional show.

Firstly, it looks truly fabulous, from the great main character costumes, onto an assortment of eye-catching vibrant dresses, the whole show is a feast for the eye, as are the backdrops. It's all professional stuff of course, so you expect it to be.

The performers though is where it matters of course with the homegrown talent and leading the way is a sweet and confident performance from Samantha Perryman as the iconic Dorothy, happily handling the role in her own way, including her quality performance of the classic of Over The Rainbow. There is no point trying to recreate Judy Garland's style as it's going to be a lose-lose scenario, and Samantha pitches it correctly her way.

Our three adventurers of Scarecrow (Gordon Ritchie), Tinman (Luke White) and Cowardly Lion (Ben Stanton) are given full and sublime character by all the performers. Gordon (who was one of the very best parts of another show I saw last year, Danny Hero) is a tremendously physical scarecrow, full of the clumsy moves of the original, while Luke brings great comic timing to his constantly rusting Tinman. However, for me, the star of the three (and probably the show) is Ben's Lion. Yes, it's a truly brilliant character as it is, given the best material of the show, but Ben truly is brilliant bringing him to life in every classic mannerism. He gets the best response from the audience and that is no surprise. Brilliant timing and delivery on that fleeting glimpse of Lion in Kansas as well. Just fabulous. 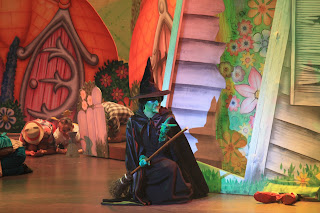 From the other main characters, Ashleigh Maddison absolutely nails the mannerisms, character and most importantly the voice of the Wicked Witch of the West. Even as Miss Gultch and the brilliant arrival on her bike, the character is being formed with just a glimpse to the audience.

The ensemble is as always brilliant, and from their routines, my favourite absolutely was the Jitterbug, brilliantly performed and very importantly worth the obvious effort put into to produce, I got pretty tired just watching it. The big songs of the show are all lovingly brought to life, including all the obvious well-known ones, however, the one I took away from the show most and still occupies my head is Poppies/Optimistic Voices, a haunting song, and truly stunningly produced by the cast, one of the very best I have heard. 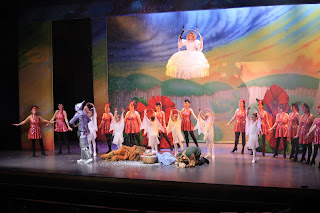 The children ensemble group (Ruby at my performance) are huge fun and offer plenty of opportunity for substantial "awws" from the audience and it was an inspired choice to have the dimutive miniature Winkie at the end of the chain. Times have changed somewhat though, so there were more than a few knowing sniggers at the mention of winkie. Toto, played by Boo in the performance was tremendously well behaved, although it has to be said that the presence on stage of a dog for such a long time might perhaps sit comfortably with everyone.

The flying scenes run smooth, increasing once again the reach of this ambitious company. Meanwhile, there is great fun to be had from the crow and tree trios in the Scarecrow and Tinman sequences, even allowing the occassionally horrendous puns on offer, they were both nicely performed by all tree of them, ahem...

Finally musical director Graham Tear whips his quality and hugely numbered (23! Take note professional shows!) orchestra into a brilliant collection of tunes, and balance is one of the better I have heard, not too often drowning out the lyrics.

The Wizard of Oz is old-fashioned fun which gells with pretty much all ages and with both it's vibrant colours and eccentric characters it makes an excellent trip to the theatre. While perhaps the group could be bolder with its selections (and both next year are much more promising), pretty much everyone was thrilled with this brilliantly created return to Oz and I myself can see why as it happily won me over.

The Northampton Musical Theatre Company perform The Wizard of Oz until Saturday 28th October 2017. They have a website which can be found at http://www.nmtc.me.uk/, while they are also on Twitter @theNMTC and Facebook at https://www.facebook.com/NorthamptonMusicalTheatreCompany 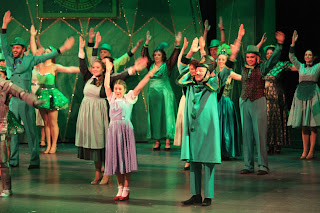 Review of The Gut Girls by University of Northampton BA Actors at Royal & Derngate (Royal), Northampton

May 16, 2022
After over two years away from seeing the BA Actors of the University of Northampton on stage, it was a delight to be back to see the final year students in their two performances on the Royal stage at Royal & Derngate. The first of the two plays I got to see was The Gut Girls by Sarah Daniels, and I genuinely wish that after that gap in attendance I had a much better show to return with. During The Gut Girls , I continued to hope that more of a spark would appear on stage. Sadly, after over two and a half hours, that spark struggled to show. Even now as I write this review, I can’t quite put my finger on why that spark isn’t there, whether it is the play itself from Daniels (unlikely, as it is a well-regarded play), or whether the cast for whatever reason did not jell and enthuse over the material. What occurred however was something that felt a little under-rehearsed even if maybe in reality it wasn’t. Either way, the scenes did not flow, there wasn’t a constant move of dialogue
Read more

May 16, 2022
The second of the two University of Northampton shows performed in the Royal for 2022 by the BA Actors was Buckets by Adam Barnard, and it was a much more entertaining, cleaner and better-performed show than The Gut Girls the day before. Barnard’s Buckets takes the form of thirty-three interconnected scenes revolving around the loose link of “buckets” be they sick buckets, bucket lists or a bit of charity bucket shaking, the scenes weave and meander with occasionally recurring characters and situations. It is very similar to other plays performed by the BA Actors of the past, including perhaps most obviously Love + Information , and as with such a format, it is also perfect for the University actors to perform. It is a delightfully delivered play, with strong performances and characterisation across the board from all the performers. I particular liked Erin Jones’ loving mother, tasked with dealing with the eventual death of her daughter, and it was great to have this poignant charac
Read more

May 19, 2022
Coming the Milton Keynes Theatre next week is a return to the stage for the hit production The Great Gatsby brought to the stage by Northern Ballet. The production reaches Milton Keynes as part of its UK spring tour for 2022 which culminates in Cardiff in June. The production based on the novel by F. Scott Fitzgerald brings all the glamour and seduction of the roaring twenties to life and premiered in 2013 and which has now had three UK tours. Set on New York’s Long Island, in the heady, indulgent days of the 1920s, Nick Carraway comes to know his infamous neighbour Jay Gatsby – a mysterious millionaire with a secret past and a penchant for lavish parties. As the sparkling façade of Gatsby’s world slips, Carraway comes to see the loneliness, obsession, and tragedy that lie beneath. The Great Gatsby was nominated for a UK Theatre Award for Achievement in Dance. David Nixon OBE choreographed The Great Gatsby and earned a nomination for Best Classical Choreography in the 2014 National
Read more