Review of West Side Story at The Lighthouse Theatre, Kettering 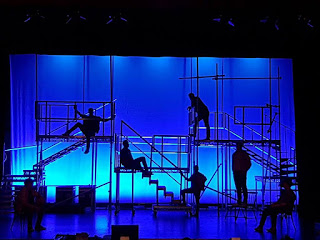 Following an interesting journey, myself, Keith, Karl, Tarquin and three ladies (it was clearly a big car) arrived at Kettering to see the Theats production of the classic musical West Side Story. This was a number of firsts for me, with my first visit to The Lighthouse Theatre, the first time I had seen theatre group Theats and my first viewing of West Side Story.

Despite never having seen the classic musical before, I was overwhelmingly familiar with it through both the exceptional songs that come from it and the original Bard source. It is an extremely challenging show to stage I imagine with both the tasking songs and the famous dance routines that have cast its place in history.

For the most part, the amateur group Theats takes this challenge and wins, primarily with its casting of the two iconic leads Maria and Tony, in these roles Lauren Jones and Daniel Fortune form an exceptional partnership on stage and performing both their solos and duets with a confident ease. Lauren particularly (who I have seen once before in A Tired Heart & The Big C) has an amazing stage precense that belies her age and is assured of future success.

Another performer that I have seen before (a few times actually) and one who has never been a letdown is Susie Pack, who here provides a likeable, but equally perfectly troubled performance as Anita. Strong on stage (what slip?) and once again effortlessly holding the tunes. From the others, I felt Kevin Maltby was the strongest of the gangs as Action, and Carly Walker was huge fun as Anybodys.

Less successful and rather disappointingly are the Jets and the Sharks scenes, so key to the pace and drive of the story, these really end up playing rather pedestrian. The opening scene sucks the life out of the show at the very beginning, taking an age it seems to get going. Likewise, the first bar scene brings the whole show to a grinding halt as well with its slow pace, all making the first act really slow at times, and at 90 minutes, that's not what you really want. It is a shame as there are some great characters developed within by the cast, but the drama and aggression of the words rarely offer the true buildup to events. Many of the fight scenes though when they do occur are generally well staged, however, just getting to them is a bind.

There were also, unfortunately, a few technical issues going on, with occasional dodgy mics, or sometimes not even on, leaving some dialogue lost, especially when the music underscore is at work. It has to be said that the lighting also runs a gamut of being both brilliant and very poor on occasion with the switching of the green/red both working and occasionally clearly not and being very evident with the latter. Also, note to stage crew changing scenes, don't look at the audience, you know who you are.

There appears to be a lot of negatives going on here, which might suggest that I didn't enjoy the show. However, this isn't true. As already mentioned, the two leads bring so much to the show that it is never going to disappoint. Likewise, the effort of the whole cast makes the show special enough in itself. I take my joy from the little moments sometimes that I see on stage, like in the first act scene where a flower having fallen off a performer is neatly retrieved by their onstage partner, and then brilliantly brought into the character with a playful stage left moment with that partner. Moments like this show how performers get their character and these ancillary moments I love often more than where the eye is meant to be because it creates the whole picture and therefore world of the show.

At the end of the evening, it is clear that Theats have done well with a challenging show and while there are some issues and disappointment, both I and the absolutely packed audience simply loved it.

For details about The Lighthouse see their website at https://lighthousetheatre.co.uk/