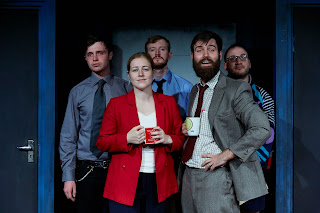 This touring show from The Wardrobe Ensemble arrives at Northampton (a co-production location) with a substantial amount of success, proudly displaying on the programmes back cover ten review ratings featuring 43 stars from a possible 50. However not wishing to be swayed by such incredible past form, I settled in the Royal to attempt to form my own opinion of the situation blinkered as much as possible from the stars shining bright.

Education, Education, Education (henceforth known as Education. Phew!) is set on the day after the day before of Tony Blair and his New Labour sweeping to power in May 1997. We are in a "normal" comprehensive school as a new day, and a new hope dawns for the teachers and pupils alike. Flushed with this hope and a Eurovision win, things clearly will only get better. Or will they?

Education ticks a number of theatres loves for me early on, with superb use of music, sharp scene changes and best of all a quite brilliant series of movement pieces throughout. Whether the cast is dancing uncontrollably to nineties hits, nervously twitching as scenes play out, or in a particularly favourite scene Headmaster Hugh Mills (Tom England and substantial beard) spinning through the various lessons as doors revolve, this featured staging of the highest order. Be this part of the work of the ensemble devised structure or the excellent work of directors Jesse Jones and Helena Middleton, it matters not, either way it creates a pacy, funny and brilliantly visual piece of theatre.

Characters are quite rightfully well over the top, including the imaginary gun toting Roboteacher Louise Turner (a truly brilliant and actually quite scary Kerry Lovell), to the deadpan German teacher Tobias played with a scene-stealing (and indeed scene stopping as narrator) brilliance by James Newton. Many pupils young and old may also delight in the convincing way that Ben Vardy delivers the role of Mr Pashley the P.E. teacher.

Also for those of a certain age, references picked up are a joy from flashback sex scenes to the music of Celine Dion's Titanic "classic", Katrina and the Waves and reference to Acorn computers and envy of internet access, the little treats are there for everyone. As a side note, I got my very first PC in 1997 thanks to a small lottery win, discarding my Commodore's forever. 1997 really was a great year for everyone it seems. Perhaps one of my favourite moments from the show though came from what was a nice little in-joke about blocking, which rather lovingly went down as well with the audience as it did in my head.

Generally, the whole evening was a hugely entertaining one with only the fly in the ointment of the live caption feed crashing to the Windows desktop screen halfway through, perhaps uncannily reminiscent of 1997 (and every year since) as user desperately battles with a required reboot during live show (they failed sadly on this occassion).

Education does comedy much better than the slightly convoluted heavy material of politics and peoples places in the world, as many of the scenes just don't quite fit with what has gone before. Worthy teacher Susan Belltop-Doyle's speech for instance on the roof, while well written and performed by Jesse Meadows, feels overlong within the context of how much of the show has played out, and as a result doesn't quite have the same inpact it might in a better paced show.

Education's success though comes from the immerse comedy momentum it gains from its first half, and the enthusiastic and high energy from all the performers still makes it a quite brilliant piece of theatre for pretty much all adult age groups. Everyone can take something from this, even if you were a child at the time as more social themes very much resinate with the current university clients. Definetely one to catch as it continues its tour. 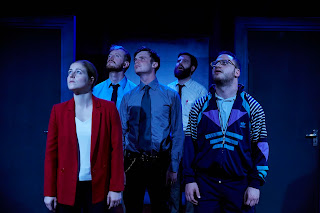