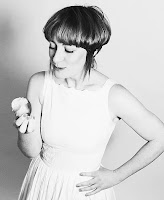 At the end of this presentation of a work in progress from local storyteller Jo Blake Cave, I commented to the poetic chap seated to my left about a conversation that I had some time ago about the desired style of delivery of a storyteller. Over the three years or so I have seen a few different ways it has to be said, and I always lean towards the more dynamic, animated style rather than, perhaps, the traditional style (if indeed there is one) of static delivery, where the words do all the work.

It was clear which side my left seated companion came down as in the interesting post-show discussion, he made his point very positively, and well made although perhaps it was clear from the assembled he was in the minority.

However, perhaps this is where you have to be careful about opening up a show in development to a rightfully opinionated public. As this show, is clearly a very personal one, and maybe, just maybe, it's teller must and only must put the show on the way she desires, as there is absolutely no chance that you will please everyone, as all opinions are different, as a reviewer now of some time, I know that very well.

However, that perhaps concerns the meat of the show the personal part, where a share like this though clearly does have its benefits are technical aspects which can be discussed and also aesthetically where the show can be improved. Not to say that this works either, as someone commented that they didn't like the lighting usage at times, however, I loved it (with the one exception of when the low light was shining directly in my face and I was getting an annoying glare. However, this is a more a glass wearers problem, with reflections and an often occurring problem in the theatre). Then another commented on the use of sound occasionally annoying, but this I also loved (with yes perhaps the exception of the slightly confused "fuse blew" part at the start). The music and sound were so low key at times that it felt like we were in a belly of a beast or something, and creating a really atmospheric soundscape as a result.

The metronomes perhaps did annoy a little (however, they did add to the drama, and for me, it didn't impact on the speech), but mainly because they were busy during my favorite pieces of the show, the reminiscent biography part. This is the type of storytelling which is my preference, I don't personally always get on with the mythical tales, I much prefer them to sit in a world, perhaps a modern one that I can get a handle on, rather all these princes, princesses, and bizarre beasts. I loved the retro style of the tape recorder, as was mentioned by others, as it was in keeping with the reminiscent part of the story, although obscurely what was played back from this was the mythical part, which was an odd choice.

As has already been hinted at, this was a more visual telling than most with Jo creating images upon the floor of the underground with chalk, and featuring petals, tables, fans and incorporating dance. The latter and physical movement were most dramatically portrayed during the tape recorder speeches, as it was suggested that both could perhaps not be done at once. I am not totally convinced when there was speech during several laps of the Underground taking place, so that ability is probably there.

So, this is an evolution of storytelling, much like Shakespeare having female Kkings and modern-day settings. There is room for it and the only way for any medium to have true evolution. Like Bard aficionados will always have pure Shakespeare to see, modern storytelling fans will always have classic telling. However we can have both and more in this world, that is the only way we move, inspire and evolve theatre and performance arts. If you are not a fan of any particular style, it is not that you are wrong, it is that you are a fan of something different. This performance for me was just what I like and I recommend that you seek out the finish product in October.

Blodeu(w)edd Untold will be performed in its finished form at Royal & Derngate in two performances on Friday 6th October 2017. Details and tickets available at https://www.royalandderngate.co.uk/whats-on/contemporary-performance-blodeuwedd-untold/