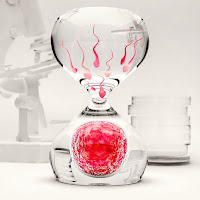 My first ever Fringe experience fell at the more than adequate hands of White Slate Theatre and their witty, carefree and yet actually quite educational Re: Production.

Housed in the lovely little studio space above The Oxford Arms in Camden Town itself, it seemed the perfect way to experience the Fringe for the first time as our two performers welcomed us cheerfully to the venue, either knowing many present or at least appearing to know them at this their first performance this year at the Fringe and willing to challenge those who choose to sit at the back. I never got to use my line, "I followed them" though.

The show is a little about reproduction and IVF, but much more about love and attraction as our two characters, Karen and Tom (first drawn in stick person form) are introduced to us. The playful fun nature of the play continues for a while as we go through the potential meeting opportunities of two possible love matches. Along the way, we are treated to a lovely little mime piece of love, sickly sweet love as they sing, brush their teeth and fall blissfully asleep together.

However, there is a fly in the ointment of this blessed relationship and that is carrying on the genes to a next generation. Tom is a born father, wanting so much to bring his offspring into the world, while Karen is a career woman, not wanting to be saddled with breast feeding and refusing point blank on formula or being a "bad mum" and leaving the baby with the father. It is made all the more ironic that Karen helps others to reproduce who have trouble the natural way, with her job as an embryologist.

This loving tale that becomes slowly but surely one of less love as emotions and conflict change the path is brought together wonderfully by performers Catherine Nicholson and Dan Burman. They form a very convincing relationship which gels and then unravels as events turn. They perform well with interaction with the audience as well, who often sit in as mute (or sometimes not so) other characters. You can't help but enjoy the company of these two characters, surprisingly well brought to life considering the brevity of the play.

There is also a lot of facts thrown at you during the piece which makes it more than just a jolly little play and at times becomes very educational. Who knew for instance that the higher a woman's IQ of a person they slightly, but significantly have less urge to reproduce?

Perhaps the best part of Jenna May Hobbs play though is how it creates the breakdown of the relationship through the reimagining of that same loving opening mime sequence. This second viewing becomes quite a sad moment as little changes depict the perhaps bigger changes that have taken place within the relationship. It is the best moment of this emotional roller coaster and leaves the audience members much to ponder over the rights of an individual to make their own decisions, no matter what effect it has on anyone, including their love ones.