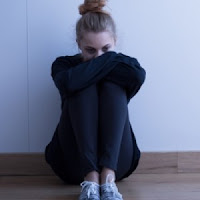 It is perhaps worth going to the theatre to be educated as much as be entertained, and the Fringe like my home grew Flash Festival seem to have a lean towards plays wishing to make a point. The Invisible Condition from Last Word Theatre is very much one of those, its theme is mental health, and perhaps more specifically the NHS approach to it.

The play itself offers us to a certain extent the two sides of treatment, we have the psychologist (Anna Demetriuo) trying to deal with a problem through observation and discussion, and then we have the psychiatrist (James Pearse) who goes by the solution of throwing tablets at the patient.

While the whole piece is very worthy and putting over a tremendously important subject, The Invisible Problem gets bogged down in too many facts and ends up being more a series of case studies than a piece of theatre. This influx of data leaves it difficult for the audience to ever create much of an emotional connection with the numerous characters that the performers bring to the stage.

This is not to say it is unconvincingly performed, as this group work well together (although Pearse does feel somewhat lacking in confidence over his lines which certainly spread concern to this audience member at least). Perhaps the strongest of the group is Eleanor Crosswell, who adds nice emotion and character into her opening eating disorder character. The early part is where this play is at its strongest before it gets stunted by too much information and lacking in character evolution.

It's a very polictical play at its core and some of the information is quite disturbing in itself. So while The Invisible Disorder means well, and it does have its moments, more clarity of characters and their development is needed if this is going to have any future success.
⋆⋆⋆Performance reviewed: Friday 11th August at Etcetera Theatre, Camden Town, London
The Invisible Condition was performed during the Camden Fringe at Etcetera theatre between Wednesday 9th and Sunday 13th August.For further details about Last Word Theatre visit their Twitter feed at https://twitter.com/lastwordcompany