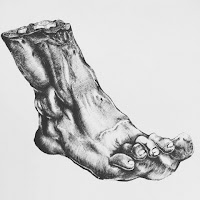 While some issue plays tend to miss the point of providing fun and entertainment as well as making their point on a relevant issue, FEET is certainly not one of them. Written, produced, directed and performed by the two-person team of Emma And Lawrence Wrote A Play, this is clearly a labour of love of the two, full names Emma Brown and Lawrence Smith, it is fun and engaging throughout.

It's "issue" is loosely about selling your body for money or art and how far you might be willing to push it. Lucy Winwood (Emma Brown) is your typical young actress, struggling hard to get those money making roles, or roles in general, and in need of money she stumbles upon the world of feet fetishism (as you, of course, would) and slowly from just images of her feet sold online, it becomes feet in jelly and then finally personal meetings with clients for full on feet interaction.

Performance wise it is great, with Emma excellent in her single role, exuding fun and realism in this oddly developing lifestyle, while Lawrence is much better in his roles of the clients (surprisingly portrayed as very normal people at times, which perhaps there are? We all have our quirks, so as long as they are legal?). I did feel at times that his playing was much less impressive and tended to be unconvincing a little.

As a play, it is great fun but loses out being excellent from its curious over-reliance of prerecorded audio, including several minutes at the start of the play. These pieces are meant to be the thoughts of the character, and while their responses by the actor to these pieces are clever, the excessive use is too much and these thoughts could happily have been vocally performed live by the cast.

However, FEET remains a lovely piece of theatre which thouroughly delights while telling its morally challenging idea and deserves a much longer run than just the two performances it garnered at Camden Fringe.

⋆⋆⋆½Performance reviewed: Friday 11th August at Etcetera Theatre, Camden Town, LondonFEET was performed during the Camden Fringe at Etcetara Theatre between Thursday 10th and Friday 11th August.
For further details about FEET visit them on Facebook at https://www.facebook.com/FEETtheplay  or on Twitter at https://twitter.com/FeetThePlay