Review of Warts & All Scuff Night at Foodies.rocks, Northampton 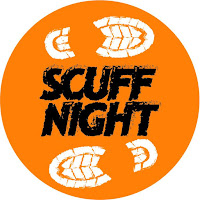 The new Warts & All theatre group have been set-up almost a year now and finally this weekend I actually managed to have my first encounter with them with their Scuff Night. It was a perfect introduction to the group for myself as it very much leant towards their theatre creation area, rather than some of their more varied gatherings they have been holding.

On this evening we were presented with short, ten to fifteen minutes extracts from four plays that have been under development for a few months, and our challenge was to select the two that would go further forward and become full pieces under the tutorship of professional playwrights Think The X-Factor, but with much more intellect. Our weapons of casino chips were in our possession and the event was to begin.

It started with Deep Freeze, a play based on a true case a short time which I remember well, about regarding a child who wanted to be cryogenically frozen at her soon to be early death. It was and remained my favourite of the evening and that was actually despite a rather clunky and not particular interesting opening scene of the warring parents. Everything after that was sparkly and brilliant and really very entertaining, helped by two superbly judged performances from Helen Crevel and Daniel Wright.

The second play, Property, was perhaps a worthy idea, as it was telling of the thankfully well-passed world of husbands possession of his "property", his wife. A nice line in the play remarked that what was his was his, and was hers was is and it pretty much summed up the fact that after marriage, the only way the lady would ever get anything of hers back was upon the man's death. So yes, Property had a great idea, however, sadly the dialogue for me was to a certain degree, less exciting and a touch stale and paled greatly against its predecessor and the requirement of the stage directions being read, genuinely diluted any impact from the piece as well for me.

The third play, Control was the one I had the most difficulty getting a handle on, with the theme and ideas it was going to tell in its completed piece not entirely clear. For me, the extracts didn't create enough interest in the characters either to warrant the selection. The theme of control over people and life could indeed offer much ground for a story, but because I suspect that the idea of a weaving play of themes is the idea of this one, it didn't sit well with this ruthless trial by fire ritual of ten minutes and out.

At the point of watching three plays, I was all-in with my casino chips for Deep Freeze if I am being honest, however, thankfully No Child with its witty and adult humour pandered to me and as it turns out quite a few of the audience's levels as well. From the opening scene of Helen Crevel climbing into a onesie with added babies dummy, these extracts were just great fun, leaving little doubt that we all wanted to see more.

My pre-announcement tweet to Warts and All declared my selection picks of Deep Freeze and No Child, and it turned out I was correct, although I did genuinely think that Deep Freeze would get top honours. For me, they were both worthy winners and I wish Deep Freeze writer Greg Dallas and Emma Matthews of No Child, the best of success (and fun) as Warts and All Theatre lead them to the completed package.

Scuff Night was a fascinating evening and something different to any I have experienced before. It was perhaps a tad vicious for us to be selective as we were, however out there are only winners and losers, and for the losers, don't stop, the very best people get up stronger when they are knocked back. A great evening all round and I look forward to seeing the winning selections on stage in the future.

Scuff Night was a one-off evening organised by Warts And All Theatre. Further details about Warts and All can be found at http://www.wartsandalltheatre.co.uk/