November 08, 2016
It would frankly be strange to mention the curtain call for a show at the very beginning of a review, however for Ten, a celebration of ten years of work from the Youth Theatre, Young Company and The Actors, is epitomises perhaps everything to say of the show. A near work of art in itself to shepherd 188 performers onto the stage as quickly, but as respectfully as possible to each individual, is a mind boggling proposition. A curtain call should never be underappreciated, as it is how you leave your audience, and Ten got it perfect.

Those 188 performers created during this 90 minute show a collection of original pieces and selected extracts from plays performed in the past. From the original pieces, Gathering Dust by Georgia Tillery was my favourite, offering a fabulous response from the audience as well as the really young youth theatre group portrayed a collection of old folk attempting to make a break for freedom. It was a really funny piece, which the youngsters clearly had great fun with themselves.

It was wonderful to see little snippets of pieces that I have seen in my time watching the shows, including the very first show I saw the groups perform, Elements of War by The Paper Birds. Like a few of the pieces selected, I am not totally sure how this worked for people unfamiliar with them. However none outstayed their welcome, if anyone was getting confused by what was going on.

An extract from Aftermath by Daniel Bye offered a timely reminder of how amazingly powerful that particular play was, while Hacktivists was re-imagined with a very different cast, boding well for the future of the young company. It was also lovely to hear once again the words of Helen Gibb in her respond piece Hi Mum, It's Me.

New piece highlights for myself were Words, Words, Words by David Ives with all the foolish chimp antics, and an incredibly well received extract from Ayckbourn's The Revenger's Comedies. Hilarious stuff!

The style of the mysterious girl in the attic to bridge the piece worked extremely well with the magic of clothes (mostly shoes) offering windows of a sort into each part of the play. The finish also was a lovely way to conclude it as well, which could happily allude to our future pieces of clothing to be put on to bring forth the next shows. I myself have my leg warmers ready and waiting.

However, this was not really about the material for me, but more a recognition of the achievements of the companies themselves. I may have only been a part of the audience for less than three years, but I pride myself that I have been there for every show the companies have produced since March 2014 (some more than once) and I sincerely hope that I get the chance to continue to be a viewer of everything they bring to the stage for many years to come.

A massive congratulations to: 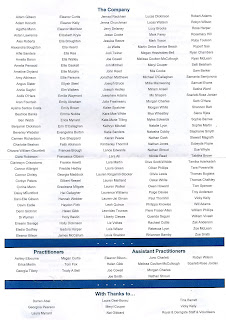