Review of The Shakespeare Revue (White Cobra) at The Playhouse Theatre, Northampton

November 22, 2016
I had heard great things of The Shakespeare Revue, presented here by White Cobra Productions. So much so, that even the fact that "Shakespeare" was in the title, had not activated that involuntary twitch that that name sometimes generates. I am generally one of those Shakespeare viewers that prefers my Bard spruced (brushed?) up a tad, giving the contents a stir after 400 plus years of simmering.

Thankfully The Shakespeare Revue, originally compiled by Christopher Luscombe and Malcolm McKee in 1993 (but added to since) for the Bard's birthday celebrations, is very much on the lighthearted side of Mr Shakespeare. Over an incredibly varied 37 sketches and musical routines, he is revered, poked fun at, honoured and slightly modified, to create a quite brilliant evening of entertainment, for the Bard or not to Bard fan alike.

Standout sketches include a quite brilliant take on The Importance of Being Earnest titled Othello in Earnest. Written by Perry Pontac it sees Othello (an improbably but brilliant cast Fraser Haines) being grilled by Lady Brabantio (Kate Billingham) over his suitability for Desdemona's hand. For those having seen Earnest, it is an hysterical few minutes as we have twisted original lines and superb puns and the weaving of a sandbag into the immortal line.

Richard Jordan steps well into the shoes of the Julie Walters role for the sketch Giving Notes (written by Victoria Wood), playing it impeccably. It is rife with classic Wood material, as prods and hints are given to the cast members of a planned comedy version of Hamlet. That play had also had another superb sketch earlier, when Fraser Haines' character returns in And How Is Hamlet?, to find that all is not well for pretty much everyone. A full company piece, it is brilliantly played by all.

This company do indeed work as a team as good as any I have seen, the musical pieces are perfectly organised (including choreography from Mary O'Brien), and the fast paced nature of some of the scenes could perhaps only work as well as they do, with a team as familiar with one another as well as these from White Cobra.

It is also quite incredible how varied some of the material is in this show. For instance I could hardly have expected a piece from Richmal Crompton's Just William to spring up, but up it does and Richard Jordan cuts an impressive William figure guiding the unwitting tourist towards Anne Hathaway's cottage (actually Mrs Maloney's in a brilliant comic turn from Bernie Wood).

The audience also get a chance for a bit of suggestive singing via the sketch The English Lesson, with a take on the Alice and Katherine (Kimberley Vaughan and Kate Billingham) scene from Henry V. Later Richard Jorden and Bernie Wood wander into the back of the scene looking gloriously glum with a sheet for our lines and the audience are happily singing a new meaning into the word count moments later. Finally special mention must go to Rod Arkle's often deadpan delivery, he was excellent especially in The Repertory Actor and a delight alone in just simply his "and me" line in Ladies of London

It is an excellent production of a fun, varied and constantly funny show, which also had a far sprinkling of great musical numbers well performed by the cast. On top of the fact that this was an entertaining evening was the love you could see the cast were putting in on this particularly special night of remembrance of director Ursula Wright, who sadly died earlier this year. This was a charity night, it was a special night and at the end over a thousand pounds was raised for pancreatic cancer. The evening could perhaps have been no better way to remember someone who I clearly know from the word of mouth of many special people, was a particularly special one. 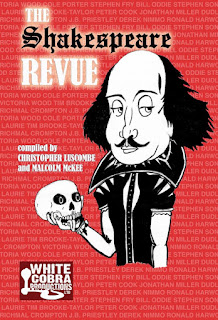