Review of The Killing Of Sister George at The Playhouse Theatre, Northampton

July 11, 2016
The Playhouse Theatre's The Killing Of Sister George offers to me the most unique review challenge yet as I have followed the creation process unlike any other, having had the privilege to watch a number of rehearsals. Seeing it from relatively early days of book in hand, to book down and to the penultimate dress rehearsal, I have seen it at at some very dramatic times. No one will disagree either that the final time I saw it, just one rehearsal away from going live in front of a paying audience, there was much still to refine. This review is of the fourth night and I will disregard as best as possible what I saw during rehearsals (with one very important exception).

Written in 1964 by Frank Marcus, Sister George was an exceptionally controversial play at its time with its suggestions that its lead characters are in a lesbian relationship, still illegal at the time. The play itself is subtle in its telling, however the 1968 film is much more explicit, capitalising no doubt from the decriminalisation act of 1967. I think, while the film was a large success, the play is a much better version with this subtlety and a limited number of characters. It is tough to watch at times and in reality very sad and destructive, however through its strong characters, a surprising amount of humour shines through. I have to say that of the now many plays I have seen, it is very much one of my favourites. 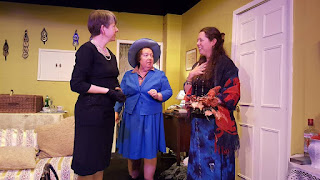 Playing Sister George is Maggie Holland, looking very much the part and superb in her facial expressions of disgust and disdain when challenged with comments, in particular from Mrs Mercy Croft (Corinna Leeder). Sister George or June Buckridge is a slowly building role of collapse and venom and Maggie captures much of this throughout the play until the final scene of total destruction.

Her "partner" Alice or Childie played by Alice Dobell is the one performer new to me from the cast, and is genuinely brilliant in the role. Offering charm and just the right about of challenge against George, Alice brings a huge glow to the role, with the childish innocence of the role perfectly created and like Maggie, she has quite a skill at saying an awful lot facially without uttering a word. Their exchange during the famous scones scene is one of perfectly pitched brilliance.

Rosie Chapman creates the caricatured role of Russian psychometrist in a stylish way. This role is not subtle in at all and Rosie has tremendous fun making the role not only her own, but every bit as larger than life it requires. Likewise Corinna Leeder relishes in the role of the really rather rude at times Mrs Mercy Croft, very much underplaying the role in comparison to that of the film. This is where I suspect those who have seen the film version might wonder. The tender exchanges of Mercy comforting Alice in the play are just that, and played only with suggestion, in the film they are much more clear cut. When George walks in on them in the two versions, the situation could not be more contrasting. 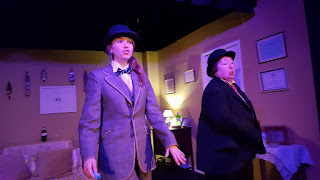 All of the cast are excellent in each of their roles, perfecting the characterisation wonderfully. I will however relate back to what I did learn rehearsals and that I would be remiss of not mentioning, the grip of the script from Corinna Leeder. There are many moments where having now followed the script somewhat myself, she goes slightly off-kilter. I mention this purely because I cannot help but feel it does detract from the performance, which while still vivid, could be so much more. I do admire the admitted skill at times in rewriting some of the script during a live performance, it even works at times, but I feel it can only result in a small loss of performance and that can only be a disappointment.

Direction from Juliet O'Connor is strong throughout with a great grip on proceedings, keeping the piece moving swiftly, particularly in the first act. For myself the work of the director was much more evident than it has ever been before having witnessed it evolve. Once you have seen the work put in creating these productions, it is hard to ever look at them in the same way again. Also once again Philip Welsh on sound and lighting creates a smooth process, moving day to morning and early evening with subtle changes. 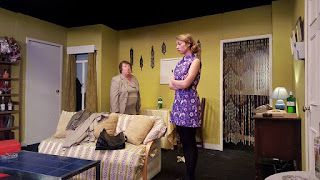 So an excellent way to complete the season and for me, in the top two of productions from the Playhouse this season, A brilliantly created and powerful play which doesn't shy away from leaving you sad at the end and four perfectly pitched creations on stage from the cast. Personally I am so glad that it all worked out well in the end, as this is one review that for a long time I was very worried about writing. An unmitigated success.

The Killing Of Sister George ran at the Playhouse Theatre, Northampton between Tuesday 5th and Saturday 9th July, 2016.

For full details of the Playhouse Theatre visit their website at http://www.theplayhousetheatre.net/