Housebound is dark in concept but high in comic pleasure as the very briefly masked Bone (Richard Jordan) takes the posh Fiona (Kate Billingham) captive in her home of fine furniture, splendid carpets and resident wasps. Without doubt Housebound suffers in these early stages of being a little under rehearsed with a little hesitation obvious at times from the performers. I think also there was still some development needed to strengthen the characters. It does however remain entertaining throughout with the clever and witty dialogue.

Another Fine Mess is better prepared and solid in its production though. This is a gem of a little play and offers a neat and totally unexpected twist to what you might expect. Set in the back room of a pub in the eighties (a crucially important time setting), we meet Stephen (Richard Jordan) and Philip (Paul Fowler) as they work on their Laurel & Hardy double act. Working with them is occasional co-performer and Stephen's bit on the side Meg (Kate Billingham).

Much more polished than Housebound, Another Fine Mess is a cleverly crafted one act play full of brilliant human drama. It is a tricky piece to review without giving away the twist and this deserves to be seen without foreknowledge. Suffice to say when it plays out, it brings high emotion to the piece and the audience. Billingham in particular is strong as the character who takes the news with initial aggression and self interest, rather than sympathy.

The Laurel & Hardy pieces are nicely performed, getting the feel just right of a tribute act take on them. There was also some entertaining choreography created by Mary O'Brien bringing the musical pieces to life. A special treat as well was a pre-recorded piece of radio programming by Stuart Linnell. Leading through the interval into the play itself, this was genuinely funny and featured a nice collection of classic tunes from the eighties.

These two shows are not the most successful of those I have seen White Cobra perform, however knowing sad circumstances behind the scenes in preparation, still leaves these as great achievements. The two plays are both highly entertaining and the latter Another Fine Mess is unquestionably the best performed with that very powerful emotional punch. Highly recommended to try to catch them as they tour on route to the Edinburgh Fringe.

Performance reviewed: Friday 27th May, 2016 at the Playhouse Theatre, Northampton

Housebound/Another Fine Mess is currently on tour until August. For details visit: http://www.whitecobraproductions.co.uk/ 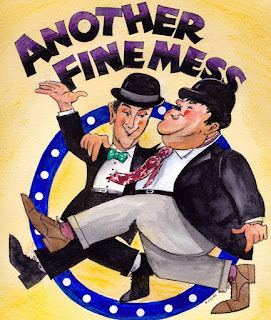