Review of Calling For Help! at the Playhouse Theatre, Northampton

April 15, 2016
The subtitle of Calling For Help is Man Vs Mother-In-Law, however I can't help but think that this is a slight disservice to this genuinely entertaining and fun play. That subtitle brings up connotations of wicked little Bob Monkhouse or Les Dawson jokes, whereas in reality the family relationship portrayed between the characters Rachel and Sean is really rather sweet. The versus bit really comes mostly from the machinations of the call centre business, where much of the play is set.

We are first witness to Rachel (Caroline Nash) and Sean (Oli Leonard) long before the play gets underway. Rachel is stalking around the theatre and bar area with Sean kept at heel, welcoming the other call centre staff, us. For this is indeed an interactive play, indeed one of the most I have yet experienced. As the play progresses, the scenes within in the call centre always involve in some way the audience. Selected members of the audience even get given a name via a lanyard with badge and a designated character trait. Be they the constantly sobbing Marie, the miserable Gordon, or Neil who hopes for a career of a upstanding nature in the future. Great mileage is made during the evening through these "willing" volunteers in the audience, however always from such interaction, some nights will undoubtedly be better than others.

Written by Liz John and Julia Wright, Calling For Help has an immensely British feel to it, set in the midlands and with highly amusing exchanges and a devilish detail of office life. The evolving characteristics of our two characters is very well formed, surviving some of the sillier aspects of the play. Despite all the really weird buffoonery that does take place during the show, there is towards the end a tremendous emotional pull from events. I was not however entirely convinced by the scenes between Sean and the baby, which although they helped move the story on and relay his emotions, seemed just a little too silly at times and the first certainly went on too long.

Caroline Nash and Oli Leonard are perfectly suited to the roles and play off each other with an extremely believable edge. Nash moves from being a deliberately irritating person, constantly upbeat seemingly at all times, and eventually develops onto one that you latter greatly enjoy the company of. It is a really enjoyable performance

Leonard I had the pleasure of seeing in performances for his final year at the University of Northampton and it is great to see him again, this time treading the boards as a professional. Like Nash's character, this is another, which without giving too much away, evolves greatly as the show goes on. At first the audience will certainly feel sorry for his lack of success with his ambitions and his suffering the presence of Rachel through both home and work life. However as already alluded to at the start, this really is at its heart a happy friendship, not the intolerance you might expect from a comedy between a chap and his mother-in-law.

Director Jonathan Legg keeps the action moving throughout the several set changes, which are mostly unobtrusive depending on how friendly the set wants to be. The set itself is cleverly designed with three revolving panels moving us effortlessly from the two main settings of the call centre and Rachel's garden. A nice touch also was the switching of the plant to move us through the seasons, we almost hardly saw it done!

Calling For Help is unquestionably a wonderfully bold attempt at interactive theatre. Making it a single one and a quarter hour piece with no interval is ambitious, but does just about work. However I think it would benefit from a break to allow exchanges between the audience, as this is a play that many would no doubt like to talk about. A few may even return from the bar a little more willing to be interactive. However as it stands this is an absolutely thoroughly entertaining and different piece of theatre. Well constructed to be interactive without being intimidating on the audience and wonderfully performed. Really worth checking out if it comes to a theatre near you on its current tour. 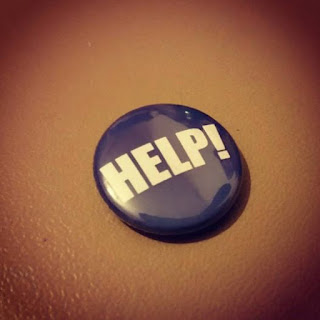