February 10, 2016
When I reviewed the Masque Theatre's Shaxpeare's Box earlier this year there was one glaring omission from the review and that was the rather wonderful and at times very comical music that Richard and Elizabeth York had composed for it. Suitably atmospheric and playful when required, it added much to the whole successful package of the production.

The reason it was overlooked was mainly because I knew the chance would come when reviewing Opening Shaxpeare's Box to wax lyrical about it. Although as it happened that original music for the play only appeared during the show via the previous recorded segments played from the computer, it was however great once again to hear it.

Opening Shaxpeare's Box was Richard and Elizabeth York tribute to not only the music of the period of Shakespeare's lifetime but also played upon the instruments available at the time. So we had during the show original design harps including the bold and noisy bray harp. We had the fabulous almost modern electronic sounding at times hurdy gurdy. We also had the most impressive use of that dysfunctional and generally useless instrument the recorder, in three bold designs no less. The recorder indeed has never sounded so good as that tenor version on display

A mixture of music was performed including a few anon and a couple by the Morrissey of the time, John Dowland. All of it was generally unfamiliar, apart from the brief snippet of Greensleeves. However it was all excellent to hear, a more pure uncomplicated music than was to come later. Simple sounds just forming simple tunes is one of the best ways to describe it. Yes music is bolder and cleverer now, and maybe better for it depending on your opinion. However this was a wonderful opportunity to hear something so clean of complicated cords.

So yes a excellent evening of music and well worth braving the tempest that was the journey to the St Peter and St Paul on the Monday evening. Well received by the appreciative audience performed with love by Richard and Elizabeth taking us back on that evening to a time where we could imagine that the first Elizabeth was sitting upon the throne.

Details of the Masque Theatre can be found at http://www.masquetheatre.co.uk/ 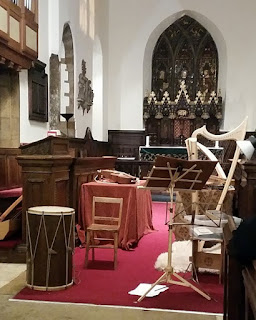