Review of Sinbad The Sailor by the Duston Players at Duston Community Centre, Northampton

December 08, 2015
I am not the biggest fan of pantomimes, however at a request I by chance found myself at Duston Community Centre (a venue I have not been to before) to watch Duston Players (a group I have not seen before) performing Sinbad The Sailor (someone I have not met before).

It was absolutely a great community based amateur production, suitably cheap (even written into the script) with just a great cast of all ages having fun. Through this I managed to avoid the need to worry about much of the pantomime antics going on and in Johnathan Freeth's script there was absolutely every panto requirement inserted (add innuendo here). For my benefit, the tale of Sinbad being transposed into the eighties was perfect as this is very much my era, especially with music. Therefore I got everything from The Final Countdown through to Girls Just Want To Have fun and all the comically named shipmates names (harking back to stars of yesteryear) in between.

Our hero Sinbad was played with relish by James Burgess along with his love interest Princess Poppy (Samantha Leith). They worked great together and I loved their Too Shy performance, and like a few of the songs, anyone who knew the eighties could see the songs coming in the script from a mile away. The setting for our adventures was the Kingdom of Pring-Al-Toob which allowed a plethora of Pringles and crisp based jokes, including the Sultan Vinegar played by David James. Stumbling around near blind constantly grabbing the wrong person gave a great reoccurring joke. Often being grabbed was our resident dame of the show Nursie Nora played with high buxomness by Tim Dwelly, doing and looking everything required of the wanton woman.

The baddies of the piece were the wonderful John Myhill as the brother of the Sultan, Wazir Welhi and Rita Ayers as Tamato The Sorceress. I have seen John a few times now in the Masque productions and he has never disappointed and as I have now discovered he is actually a very good panto baddie as well. Managing to garner the constant boos of the audience and carrying of a rather garish green wig with aplomb. Rita as Tamato was at the offset a baddie, but whether the crowd knew what was coming or not, she didn't elicit the boos of the crowd. They were very much kept for Wazir and quite rightfully.

Great fun was to be had from Wazir's henchmen Hugh (Jonathan Whalley) and Cry (Tina Hartley), although I am not impressed by them making us sing "Oh I Do Like To Be Beside The Seaside" quite so many times. Finally a special mention to everyone else involved including the children who without doubt looked like they were enjoying every moment. There were a few obvious stars among them and a few easily distracted, which made the whole afternoon even better.

The script was everything you required of a panto, featuring all that "he's behind you" antics and plenty of innuendo for the adults featuring sextants and poles and for the best part kept everyone interested for its actually quite substantial length. I also absolutely loved the monkey and camel and that end between them was inspired.

So yes I enjoyed it. It was a wonderful afternoon of family entertainment with a somewhat more raucous and distracted crowd than I am accustomed to at the theatre. However this transcended theatre and just became a full flung family piece of chaos and I suppose at the end of the day this is what panto is all about. Perhaps slowly I am beginning to get it. Oh yes I am!

Sinbad The Sailor ran at the Duston Community Centre, Northampton between Wednesday 2nd and Saturday 5th December 2015.
For full details of the Duston Players visit their website at http://www.dustonplayers.org.uk/ 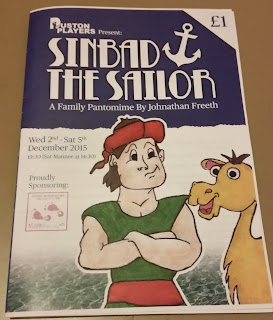