Review of An Evil Gathering Of Infidels performed by University Of Northampton BA Actors at Isham Dark (Avenue Campus), Northampton

December 10, 2015
Last month I was present for Orientation, very possibly the best ever University of Northampton BA Actors performance I have seen. Therefore the second groups ingeniously titled An Evil Gathering Of Infidels had much to live up to. Now lets get it straight from the outset, for me this wasn't quite as good as Orientation. However it was up there with the best of them and was perhaps such a different beast of a show that it is probably unfair in any case doing the comparison.

First of all it is very much less character driven, as although there are several strong and defined characters in the play, actually only ten of the twenty-one performers even have character names. Those other eleven either have single unnamed roles or move between a number or groups of characters, and sometimes rather magnificently portraying doors (holding doorknobs in their outstretched arms).

Lead character (for the first half at least) is Charlie Clee (last seen pursued by a bear) as Daniil Kharms, a writer and founding member of artists collective OBERIU, born during the Russian Revolution and pursued by the KGB, headed by Niccoli Yezhov (Kieran Hansell). As his pursuers and straight out of the Keystone Cops are Yazhov's officers, Rakukin (Sophie Guiver) and Pakin (Jared Gregory).

It's fascinating that for the first ten to fifteen minutes there is hardly any dialogue and the audience is treated to several expertly choreographed pieces. The exchange of the letter a particularly wonderful one with pretty impressive slight of hand in action. In the early stages of the play as well in the scene where confronted with the dead body, Clee manages to perform some expert slapstick prowess.

Despite the subject matter, there are some exceptionally funny scenes. Both Guiver and Gregory milk up the officers action, with the former a particular delight. Danni-Louise Ryan is fantastically dippy as the "Hello!" receptionist, providing comical confusion to her first and second act visitors. Elizabeth Zion steals her scenes as the mad cat woman Maria, spectacularly arriving with her cat riding the floor cleaner, just brilliant and her magical looks to the audience cracked several of them up.

At mention of the audience, I would take this opportunity to wind back to the beginning of the show as we are greeted pre-show by a highly interactive gas-masked wearing individual. Wielding their torch and challenging and investigating the audience manages to establish a slightly intimidating but also amusing environment. A brilliantly inventive concept well presented.

The second half moves away from Clee's character and hands the reigns to Hansell's Yezhov and his wife, a brilliant Stephanie Waugh as Antonia Yezhov. That cigarette stubbing out was most magnificent, as was indeed the concept of that opening of the second half and the audience requested to become mourners. Hansell is brilliant throughout the show whether he is mourning in an over the top way or conducting his imaginary orchestra through the classical musical strains (excellent music use throughout the play)

Of the lesser characters, I was especially impressed by the clowning, comic antics of the three delivery men; Cynthia Lebbos, Yolanda Lake and Elliot Holdon. Lake's facial expressions especially were absolutely brilliant. Finally I shall have to mention the brilliant over the top performance of George Marlow as the gown and pants wearing Sakerdon Michileovic.

It's difficult to highlight all of the performers in such a play and for those not mentioned, you have my apologies, but you were indeed vital and excellent to make the piece so complete. As the first performance, I was very impressed with how clean everything went, with only a couple of noticeable mishap moments.

It was however once again a most brilliant production and superbly put together by director Kristoffer Hubball. This wonderful group, that I first had the privilege of seeing a mammoth twenty months ago are setting their own bar very high and I am now counting down the days to see them again at the Royal in March. You are brilliant now, so I am in wonder for what you shall be providing in 2016.

An Evil Gathering Of Infidels is performed between Wednesday 9th and Saturday, 12th December, 2015
Facebook group for the event: https://www.facebook.com/events/449152135275248/
Twitter feed for the University actors is @BA_Actors 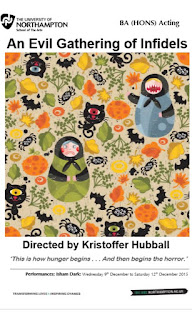