Review of Dr. Seuss's The Lorax at The Old Vic, London

December 18, 2015
It was obvious I know, but being struck with my ultimate horror on entering The Old Vic of hundreds of children, made me uncomfortable at the outset. Especially as this wasn't a pantomime, could they possibly be controlled? Would there be screams, bawls and cries of "I want to go home!" etc.

There was not, this audience was actually one of the best behaved that I have ever experienced. I heard no grumbles, no sweet wrappers, no mobile phones. All I did hear on a couple of occasions, were a few squeals of absolute joy at what they were seeing. That could easily have been me; but it wasn't; as The Lorax is a thing of absolute wonder, a visual and audio feast like anything you could ever dream of.

Adapted for the stage by David Greig from Dr. Seuss's surprisingly serious tale, it tells a rather observant and modern tale of the perils of deforestation. At the time groundbreaking, it has over forty years later lost none of its relevance; very much a sorrowful taint on humanity perhaps? I have read a review today that suggests that it is too preachy in its telling, but I would suggest that if you find this wonderful show too preachy there may be something lying in your subconscious that you might need to address.

The message is clear yes, but gently told among colourful surroundings and joyful songs. When I say joyful songs I really mean it. The collection from composer Charlie Fink; of Noah and the Whale band fame, are of exceptional quality and combined with choreography of the pieces from Drew McOnie, make them a particular highlight of a show of endless ones. The pick for me of the song numbers has to be the exceptional Thneed 2.0, a great tune and the funniest routine of the night. Who couldn't love a somersaulting banana?

This is predominantly an ensemble show, but it is led with sublime skill and presence by Simon Paisley Day. Holding a tune superbly and giving huge depth to the character of the Once-ler, despite being saddled with his gloriously garish wardrobe. He deftly manages to make the character both boo hiss wicked, while maintaining a sympathetic edge, as you can feel his plight between wanting wickedly obtained success and remorse for what he has done.

The foul deed is done upon of course to our title character, the glorious Lorax, controlled by Simon Lipkin, Laura Cubitt and Ben Thompson, and voiced with boldness and grumpiness by Lipkin. Together the three pour over the magnificent puppet, either hunched, crouched or laying down behind and you might think this would be a weird distraction. However the eyes are constantly on the seemingly living breathing Lorax, with totally realistic movement created by the three puppeteers from perfect posture to twitching mustache. There was a magnificent moment when the Lorax took a particularly dynamic pose on a tree trunk and an unremitting cry of joy and laughter came from a younster somewhere towards the back of the stalls. A real magic moment to witness, as was the rest of the audiences reaction to it.

The only other fixed character from the cast was Emily Houghton, who had the rather interesting role of the donkey. An interesting one for the CV no doubt. However her performance was quite brilliant, creating a very endearing and comical donkey. The rest of the cast are slightly difficult to put a handle on, however there is no baggage in this ensemble. As be they parcel deliverers; a brilliant lead out of the interval, or slinkily sexy lawyers. The emsemble are a cast of exceptional talent and skill.

Their skills do not just stop at dancing, acting and singing however as they also bring the world of Dr. Seuss to us through the growing and tumbling of trees, to the puppet controlling of dancing and tea supping fish, to the flying of beautiful birds over the audience. The director Max Webster has created a constantly flowing piece despite so much set from designer Rob Howell to handle. It moves effortlessly from scene to scene, not allowing the attention of the contrasting audiences demographic to wander. It is actually one of the finest set changing shows I have seen, and there truly is a lot of set to shift.

Well in all honesty, it is one of the finest shows I have seen. Joyful, meaningful, delightful. Delicious on the eye, tingling on the ear, and trembling in the heart. The Lorax is a thing of beauty that appeals to all ages and tells its powerful hidden story with grace.

The Lorax is indeed a glorious thing of joy,
That will clearly delight any girl or indeed boy,
The world of Dr. Seuss becomes alive before your eyes,
Making them most bold, as big as mince pies,
I suggest that you head to the Old Vic at pace,
As tickets may disappear most soon from all trace.


The Lorax continues at The Old Vic, London until Saturday 16th January, 2016. Details can be found at http://www.oldvictheatre.com/whats-on/2015/the-lorax/ 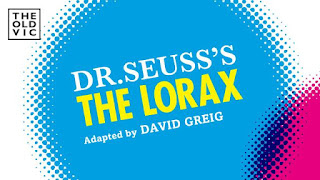