Review of September In The Rain by John Godber at The Playhouse Theatre, Northampton

October 02, 2015
It seems odd to describe a play that features long turds in drains and a seemingly constantly bickering couple beautiful, but for John Godber's September In The Rain it really feels appropriate. It is a wonderfully relaxing and at times extremely funny play (the turd moment a particular classic) telling the reminiscences of the elderly Liz and Jack's trips to Blackpool.

It also provided some emotional memories for myself as Blackpool was the place that I spent my very best family holidays in the eighties and early nineties. I have a truly fond feeling for the place despite now not having been there for over twenty years and I felt well the trials that Liz and Jack suffered from the occasional inclement weather of Blackpool. Oddly enough I remain sure now that the best weather I ever witnessed there was when we stayed right through Christmas one year. Blackpool in summer and early autumn simply cannot be trusted.

September In The Rain is produced by White Cobra Productions and this is my first encounter with them, although on this evidence I will try to make sure it is not my last. White Cobra is also very much the baby of our two stars of the piece Kate Billingham and Richard Jordan, having formed the company in 2012. As Liz and Jack (and occasionally a few other distinct characters) they are the perfect partnership. They are, put simply, perfection in their roles. Sparking off each other in glorious ways, creating what is a love and hate relationship and ever so believable they have spent decades together. Jack may well not want to hold Liz's hand, but we know they love each other really.

The direction from Lynne O'Sullivan is simple and clean allowing the characters to be the stars of the show. There is no need for anything more that the simple table and chairs or occasionally troublesome deckchair. The world is created through the tales told and the prompting from screen projection is rarely needed. Also simple but highly effective was the lighting and sound provided by Philip Welsh, Rod Arkle and Paul Fowler. I wonder if those tide sounds were genuine Blackpool ones? I think myself they were probably too calm to be from there.

This is a glorious and reet proper northern comedy performed by Billingham and Jordan with a loving and big beating heart and I absolutely loved and relieved every single moment of the tales they had to tell. 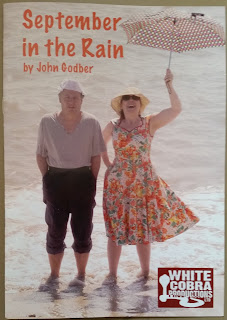