Review of Lilies On The Land performed by The Masque Theatre at the Holy Sepulchre, Northampton

October 12, 2015
A couple of weeks ago I had the pleasure of seeing an all-female cast at the Playhouse perform Bazaar & Rummage and to see a four strong cast of ladies in the latest Masque production was an equal delight.

Lilies On The Land is written by the wonderfully named Lions Part, a group of professional performers that collaborate to create theatrical pieces, and in this they have truly created a gem of a show. Telling the story of four former Landgirls whose memories are stirred upon hearing of the death of Winston Churchill, their reminiscences form a loving history of their challenging, occasionally sad, but often humorous time on the land.

The four strong cast of Jen Kenny, Sarah Stringer, Hannah Burt and Liz Clarke are uniformly excellent. Jen Kenny portrays a wonderfully refined and obviously quite lonely Margie and she has a confident forward way of projecting to the audience. That time where she just sits while the rest join in a jolly song are genuinely quite sad moments. Sarah Stringer's Peggy is quite different, a confident cockney who provides much of the laughs and is almost always a cheerful presence.

The youngest cast member Hannah Burt, who I had been delighted by as Red Riding Hood in Into The Woods last December, was once again a sparky presence. I particularly liked her other characters (the play features as well as the four mains, literally dozens more played by the cast) that she effortlessly drifted into. She was, and I mean this very kindly, a most wonderful and comical cud chewing cow. The final cast member just about edges it for me as the best performance. Liz Clarke's Vera adds a glorious air of authority to proceedings, the obviously more educated character but portrayed with a mischievous edge. A most wonderful performance.

The play itself is a constant delight and the songs throughout always provide a surprise and are absolutely perfectly performed by the cast. The play itself, while it has many visual moments, does have a very wordy, descriptive feel to it (a good thing) and I could see this working equally well as a radio play.

Having said that, director Ursula Wright has crafted many wonderful moments on the eye, including comic moments like Run Rabbit Run. The addition of the boxes is also a clever inventive idea and that with set designer Bex Fey and the wonderful colourful backdrop made a lovely visual flair. I also felt not performing as a round helped the clarity of the performances greatly, and while the round is a wonderful dynamic flair for a director no doubt, it is also I suspect both a challenge for them and the audience sometimes. As a silly side not, I did miss the seemingly constantly present Owen Warr though, so as a slight indulgence, I would myself have had him to one side of the stage performing Winston's lines. However that is me.

A wonderful fun play, lovingly and skillfully performed and at the top of the list of amateurs plays I have seen to date.

Macbeth was performed by the Masque Theatre between Tuesday 6th and 10th October, 2015 at the Holy Sepulchre, Northampton.

Details of the Masque Theatre can be found at http://www.masquetheatre.co.uk/ 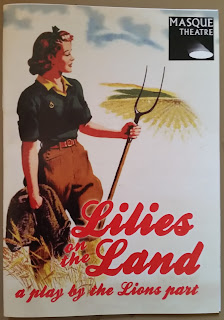