Review of The Hound Of The Baskervilles at the Looking Glass Theatre, Northampton

October 22, 2015
And so the next generation of the Looking Glass Theatre begins, lifted gracefully from its former home and planted into the arms of Hazelrigg House and its performance space the glorious St Peters Church. The move is complete and there is perhaps nothing better than a light, fluffy and fun reinterpretation of oft told Sir Arthur Conan Doyle tale The Hound Of The Baskervilles to begin. Created as some sort of chaotic amateur dramatic performance with a feel of Sherlock Holmes does Pantomime, this is indeed a silly entertaining feast.

A cast of just three coping, mostly, with all the roles of the play adds frequently more chaos. Our cast are in no particular order Marvin Freeman, Alex Rex and Katy Corrie. I was sure when I saw the original cast that Freeman would absolutely be Holmes, however this throws a curve ball with Rex as the famous sleuth. It is appropriate though as anyone aware of the story will know that Sherlock is actually quite absent for much of the story of the Baskervilles, so it leaves the authoritative Watson (Freeman) to keep the story moving along. He cuts the mustard as much anarchy surrounds him and leaves Rex to revel in the delights of Mrs Barrymore and her "Spit the dog" dog.

I think perhaps the character of Mrs Barrymore is the best role here and there is no better scene in the play than when she is offered a significantly high chair to sit while she tells her tale. Moments of agony are sustained by the audience as they and indeed the cast end in fits of laughter as she tries to, erm, get comfortable. It's not only a hysterical moment, but also one of impressively clever skill to complete it. A truly magic moment.

Freeman maintains the professional edge in his role and is the constant calm at the eye of the maelstrom. Katy Corrie has to deal with the bulk of the other characters, including briefly cleverly taking over one in the second half. Her moment though is in the role of the snooty Mr Stapleton. Constantly in pursuit of a butterfly or a moth, or perhaps some other nefarious deed?

The set is simple and functional and it matters not that the doors don't close. Clever devices such as the "bog of doom" cloth work super well and offer great comedy material. It was great to see Hazelrigg doubling as Baskerville Hall (use your resources) in the "rare film", and also I am sure some third year University actors were in that film if my eyes didn't deceive me?

Congratulations to adapter Leigh Souter and director James Smith on creaing a great way to begin the new generation of the Looking Glass Theatre. It's a shame that this only makes a brief three night appearance and also misses the weekend spot that I know at least a couple of people are sad about. I hope it rears its hairy head again and a few more people can delight in the admittedly very silly, but oh so fun antics. Howling good fun! 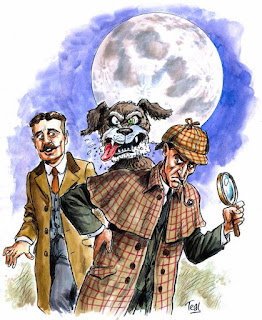