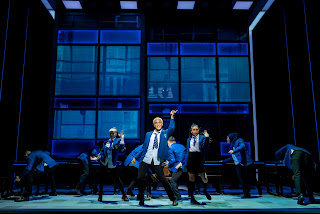 Everybody's Talking About Jamie apparently, so this new musical leads us to believe, as it continues its first UK tour launched just a month ago. The musical written by local boy done very good Tom Macrae alongside Dan Gillespie Sells and Jonathan Butterell has been playing to packed audiences and rave reviews since launching in 2017, first in Sheffield and then in London, so we need to talk about Kevin's (aka A Small Mind) thoughts.

Jamie New has a dream, a dream not many 16-year-olds harbour. He dreams to be a drag queen. However, while his mother Margaret and her best friend supports the idea and encourages him to live the life he wants, others including his father and school "bigshot" Dean think other things. However, when Jamie meets shop propriety Hugo, he finds his dreams may well become reality. 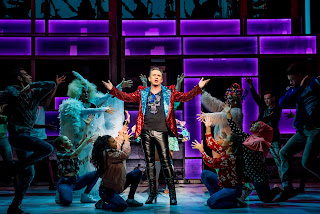 Everybody's Talking About Jamie is proper theatre, feelgood, sharp writing and clinically but also nicely nuanced direction and choreography from Kate Prince. It is perhaps one of the most minutely created pieces of theatre around at this moment. Characters are brilliantly defined and performed stunningly by all the cast. Scene changes are perfectly defined and performed by the cast, constantly in character. Technically it's sublime from Anna Fleichle's design, Lucy Carter's stunning lighting, Paul Groothuis' quality sound, and some truly brilliant video design from Luke Halls. All in all, this looks and sounds perfect, and that is before delving properly into the performances. 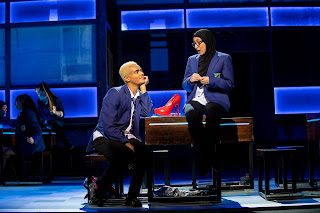 In the lead, Layton Williams creates the campest of camp Jamie, likeable, watchable and quite a mover, even in the epic red shoes. It's an iconic role which I am sure is to live through the years, and Layton puts his own stamp on the role and one to be remembered.

It's not all about Jamie here though, and maybe many will actually leave the theatre talking about Amy Ellen Richardson as Jamie's mother Margaret as she is truly amazing. She brings huge warmth to the character and while her rendition of If I Met Myself Again (featuring an amazing contemporary dance from Kazmin Borrer and Ellis Brownhill) is a delight in itself, it doesn't quite prepare you for the show-stopping performance of He's My Boy. It's difficult to know how someone could imbue more emotion into a song. Simply incredible. 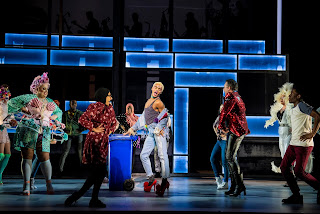 Shane Ritchie once again shows what a classy performer he is, proper quality old school as Hugo, and as always an incredibly safe pair of hands on stage and his brilliant performance of The Legend of Loco Chanel is right proper. George Sampson is superb as school bully Dean Paxton relishing in the role and constantly in character throughout scene changes brilliantly as well. Elsewhere Lara Denning is nicely wicked as sharp-dressed Miss Hedge and her contribution to And You Don't Even Know It is fantastic and full of humour. Sharan Phull also offers a lovely sweet performance of Pritti Pasha and her solos are filled with much emotion. 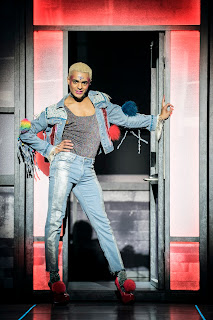 Macrae's script is funny, heartwarming and perfectly timed, while Gillespie Sells creates some superbly catchy songs like the title song and Work of Art, and onto the warm emotion of the light of Spotlight, If I Met Myself Again, and It Means Beautiful.

Everybody's Talking About Jamie is almost perfect theatre, offering something to everyone and transcending perhaps those who like plays and musicals, as the former will appreciate the precision of the work and storytelling of the show, while the latter will revel in the brilliant song right until the curtain call. Its a quality show and there is no doubt about that.

Get talking to your friends about Jamie, he rocks.
⭐⭐⭐⭐⭐