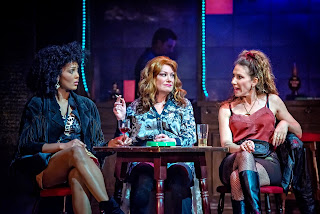 After what seemed an age, it was a delight to finally have a play to see at Milton Keynes Theatre, following an abundance, of admittedly very good musicals. So, was this turn towards straight play with Band of Gold, a sparkling gem, or something you might have picked up in Ratners?

Gina is down on her luck, short of money, recently split up from her husband and trying to look after her child while dealing with the loan shark she has fallen into a trap with. When she meets Carol and Anita through the course of her new job as a cosmetics seller, perhaps a very dark but profitable world may open up to her. 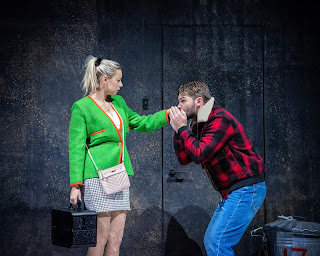 Back in 1995, Kay Mellor's Band of Gold became a huge success on television offering groundbreaking roles for the likes of Cathy Tyson and Samantha Morton, and this play, written by Mellor herself follows the storyline in condensed form, of the first series. Unfortunately, any regard for the quality of this original series is lost in the wake of this broken and poorly created play. While Mellor has had immense and unquestionable success on television with her numerous award-winning dramas, on the evidence of Band of Gold, her ability to create a stage play is somewhat limited.

Written for the stage seemingly exactly like she might write a tightly edited television series means that perhaps at least ten per cent of the running time consists of watching furniture and flats being moved about. There are simply far too many scenes in this play for it to ever have any flow to it. This disjointedness means that you never ease into the telling of the storyline and the characters.

It doesn't help that it feels unsure of what path it is taking, it plays at comedy at times, but is it a dark comedy, childish comedy, or what? This is a serious drama dealing with very serious issues and the end of the first act and some minor power gained from it, it is instantly diminished by the almost childish dialogue in the opening scene of the second act, which leaves an audience totally unsure whether they should laugh or not. Elsewhere a particular scene with Curly and Carol is best forgotten as perhaps something that I am sure worked on television but in theatre, feels immensely awkward. Kudos though to Steve Garti for performing it though, although I doubt he will be flagging it on his CV in the future.

So, while television is to blame for the disjointed script and scenes, it also is responsible for a series of inferior performances as well. Cast to be populist rather than to create a gripping well-performed stage show, the likes of Laurie Brett (Anita) and Gaynor Faye (Rose) feel out of their depth here on the stage. It gets worse though as Kieron Richardson as Steve shows that his best skills on stage are kicking things and shouting a bit, while Shayne Ward literally plods on as Inspector Newall, says his lines, with little projection at all for such a large theatre space, and plods back off again. If you want to cast your entire main cast from Eastenders, Emmerdale, Hollyoaks and The X-Factor, I'm afraid this is what you are going to get. Having said that, I'm sure you will be happy with the ticket sales as a result, even if your theatre credibility has plummeted. 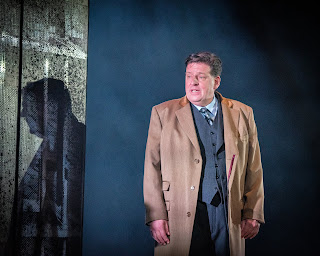 It's not all a disaster though cast wise, Sacha Parkinson makes, what appears from the programme, to be a highly creditable stage debut as the torn Gina, and Emma Osman nails the role of the sassy Carol in her first touring show. Elsewhere it is great to see Andrew Dunn as Ian Barraclough, although he is woefully underused and trapped in a very poorly written role.

I hate giving bad reviews, anyone who has read my reviews for long will always know I am generally a theatre stalls half full kind of reviewer. However, Band of Gold really is a poor show, lacking in thrills, uncomfortable balance in the comedy, and a really disjointed and as a result, slow stage show. I wish I didn't have to write reviews like this, but I'm afraid Band of Gold is a crushing disappointment.