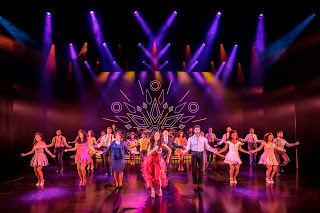 Being of about the right age when Gloria Estefan and the Miami Sound Machine first started to make it big, I was quite a fan. Even going so far as to have a few old vinyl singles and a couple of her albums on this new fangled CD system, in what was an admittedly limited music collection. In this collection was my favourite Estefan album, Cuts Both Ways, which included the track Get On Your Feet, which of course inspired the title of this relatively new musical of the life of the Estefan's. So, does it captivate this distant original fan, and or does it resemble a dad doing a bit of Latin dancing?

On Your Feet! is a telling of the Estefan's battle for success beyond the Latin market and interspersed with snippets of what made them who they were with family flashbacks, and it's safe to say that it is an endless mix of success and failure. 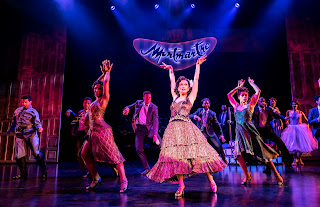 Where it works; vibrant colours from costume, backdrops, some superb choreography, and excellent music from the superb, occasionally on stage, band; this is a brilliantly entertaining show. However, for all its vibrancy from this, the often dull and corny book, over-complicated and busy scene changes (what is going on with those flats being moved all the while, even in scene changes? So clunky and distracting), and a few only average performances means it never quite comes to life.

Maybe half of the issue was that opening night of this first UK tour at Milton Keynes Theatre was beset with problems. These included a fifteen-minute delay at the start, cover Francesca Lara Gordon on for Philippa Stefani as Gloria Estefan, projection cutting out and showing the dreaded "signal" message in huge lettering on its return, a dodgy mic and a bit of set that refused for far too long to fix down. It's safe to say it probably wasn't the most successful evening of the tour. 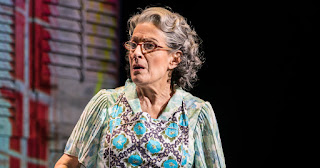 Understudy Gordon as Gloria Estefan is a very capable performer, commending on stage with a superb singing voice, however, for me she doesn't quite cut it as Gloria, missing the vocal style by some distance. Gordon though beyond this was amazingly confident stepping into such an iconic role.

George Ioannides as Emilio Estefan is excellent, despite what felt like a rather nervous start in his opening singing number. He looks the part, and at a very shallow level, such as the audience fell to, he looks good in tight shorts. His charisma wins the day throughout and his singing talent is quality, despite being challenged with extremely difficult numbers to perform. 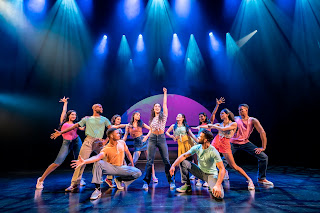 Madalena Alberto has perhaps the strongest singing voice as Gloria Fajardo, and her Mi Tierra is perhaps the best-performed song of the evening as a result. Completing the main cast is Karen Mann as Gloria's grandmother Consuelo, and this often comic role manages to garner most of the laughs from the show, despite it being very caricatured at times.

On Your Feet! is a curious thing, despite being beset by issues and rather corny in written content and scene-setting still manages to just about entertain throughout. If only the show itself could have been as upbeat as the music that inhabits it, this could have been a cracker of a show. As it is, it entertains, but never really fulfils the legacy that it should for the talent that is Gloria Estefan and the battles that she and her husband Emilio won.