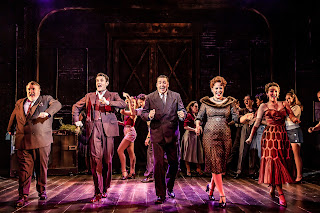 Curtains comes with much to live up to, created by the legendary pairing of John Kander and Fred Ebb, no less than Cabaret and Chicago among their work, this was their final show working together before the death of Ebb in 2004. It also forms what on paper looks a brilliant concept, a "musical whodunnit". So, does it fill with intrigue and thrills, or does it end up being more of a whocares?

When Jessica Cranshaw, star of Robbin’ Hood!, a musical set for Broadway, is murdered onstage, detective and not shy of the stage himself, Frank Cioffi, arrives to solve the case. Can he solve it though without getting distracted by the cast and the thrill of the greasepaint?

First and foremost with Curtains is that it looks fabulous. The set from David Woodhead evokes the look of the theatre perfectly, simple and effective. Added to this costumes from Gabriella Slade look sublime as well, making it a visual delight, all creating the era extremely well. 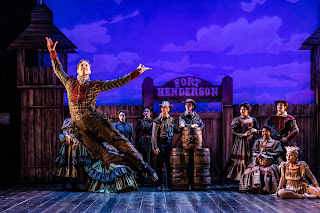 Elsewhere perhaps the strongest part of the show, choreography from Alistair David thrills every number, from the simplicity of the work in What Kind of Man, to the big full-cast ensembles like Thataway, these numbers look brilliant, and perhaps end up being better than some of the numbers deserve at times.

Several performances save the show, the best of these being the best of the written characters like the cutting director Christopher Belling played with a glorious relish by the always more than reliable Samuel Holmes. He has such a presence on stage, I doubt there is any character he could fail to make interesting. 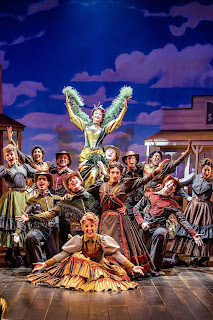 Also, tremendous is Rebecca Lock as the shows co-producer Carmen Bernstein. She creates an exceptional character, getting the total amount out of the often at times rather obvious script. So much in fact in this show is perhaps due to the cast and crew rather than the original material.

Jason Manford once again proves he is a talent in musical theatre, as he is good value in the role on the Lieutenant himself Frank Cioffi. His burgeoning relationship with one of the cast members is likeably played, as is his infectious love of the theatre. A final mention of the cast must go to Carley Stenson as co-writer Georgia Hendricks, who adds class to the show and has a delightfully strong voice for all her songs. 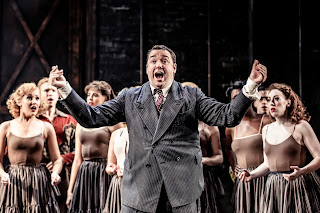 Technically it went reasonably well, although some music was too loud for the singers to project beyond and during Coffee Shop Nights the surprising occurrence of noises off from conversation could be heard. Also, it's best not to mention the shocking blackout lights back up again moment at the end of act one, except to say professionals shouldn't react to an error like some of them did. No names.

Curtains is a curious show, it should be so much better than it is, the sum of what it is looks brilliant on paper, but it just doesn't deliver as you hope. There is no question that any fan of musicals will get something from it due to its curious mix of concepts. Those casual theatre goers though might be best to seek their thrills elsewhere.