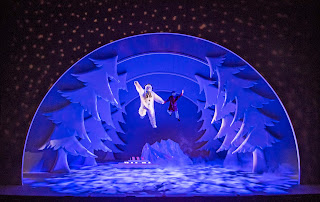 For those of a certain age (me), Raymond Briggs' The Snowman formed quite a part of early Christmas childhood, despite at just 26 minutes, not featuring for a great deal of it, the song Walking in the Air especially lingers in the mind, and made a star of Aled Jones to boot. Seeing this extended stage show now reminds this, now a forty-plus year old, of the innocence of childhood that doesn't always exist as much now. Not to say the youngsters in attendance were virtually all captivated by the evening.

The Snowman is a simple tale of a boy who makes a snowman and on that magical evening, it comes to life and takes The Boy on an enchanting journey of exploration, including seeing Father Christmas. It's loving and innocent and deserves the tenderness of telling that this production brings to it. 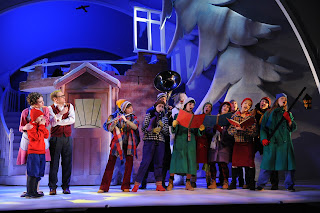 No more telling how good this show is, is the brilliant moment all are waiting for, just before the interval as expected, when we are walking in the air. It is beautifully done and brings a lump to the throat without question, and on a technical note, it is brilliantly orchestrated by the team from Flying by Foy Ltd with no fuss and impresses greatly in the cleanness of the whole preparation and arrangement.

The Boy is played across performances by Johnny Jackson, Max Goodridge and George Nearn Stuart, and on review night, Jackson took the role and made it a captivating one. Showing maturity beyond his years, he enthralled the audience with his controlled performance. It is no mean feat to be the lead at such a tender age, and the three 9-11-year-olds in this productions tour have much on their shoulders and based alone on Jackson, they carry it well. 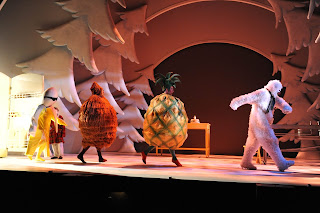 The rest of the cast, except Kane Hoad as The Snowman himself, works as a neatly controlled multi-rolling team in a menagerie of outlandish and brilliantly bold costumes. This show is often as much a dance show as a children's tale, especially in the second act when it becomes a story-lite excuse for having a good old knees-up at the North Pole, due to the stage show long having exhausted Briggs' original storyline. It doesn't matter though, as its all great fun. Dealing with the main bulk of the original story before the interval is a neat idea as it allows it to flow without interruption, and we only have the culmination to contend with after a frenzy of dance. 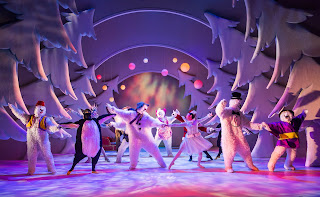 These dance sequences show the depth of quality within the show. Choreography from Robert North shows depths beyond what you might expect from a kids show, with Emanuela Atzeni as the Ice Princess/Music Box Ballerina and Ruben De Monte as Jack Frost the best of an excellent cast of dancers. 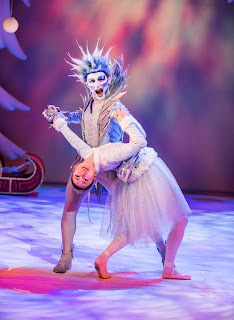 The whole show is played out upon a delightful snowglobe set by Ruari Murchison, brilliantly recreating the original design of the animation, right down to delightful trees and a cleverly growing in size home as the two friends venture around the house, it is a visual delight and perfect in every way for a children's show. Director Bill Alexander creates a lovely flowing show, with swift scene changes, while musical director Costas Fotopoulos and his musicians bring the beautiful score to life.

The Snowman is a delight for children young and old, bringing the joy of innocence and simple storytelling to new young minds and rekindling old ones for those longer in the tooth. Moments of The Snowman might melt your heart with the warmth it brings to the stage.

Visually stunning and brilliantly absorbing show for young and old.
⭐⭐⭐⭐