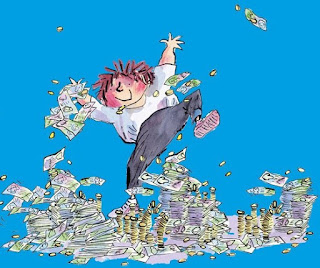 I feel that like at the start of an official meeting I need to make a declaration at the beginning of this review. I'm not a fan of the work generally of David Walliams, more specifically his adult humour, I find it crude and unfunny. However, Billionaire Boy was my first encounter with his work for children, long since having left that time behind. So, while I had some trepidation with what lay ahead, including of course being surrounded by sweet eating children (and adults) in the theatre, I went with an open mind.

Joe Spud is rich, we are talking real rich. Heir to his father's wealth, created by the invention of Bumfresh, a brand new way of thinking in the loo roll world, he is happily tossed million-pound cheques on his birthday. However, can being rich and having it all bring you happiness? Or do you sometimes just want a friend and not a computer to play games against.

Billionaire Boy is really rather fabulous, there I admit it. It is no coincidence actually that Walliams' main illustrator is Quentin Blake, chief artist for my go-to writer as a child, Roald Dahl. Billionaire Boy is pure Dahl in style, there is no doubt you could imagine these grotesque characters and ideas being penned by the master, and with the proper twinges of morality to thrown in. 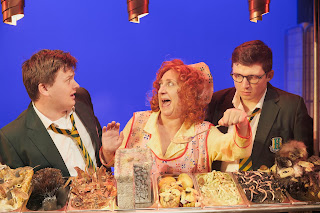 Billionaire Boy features some great performances and characterisations from all of the cast, broad strokes in keeping with this being targetted of course at children, but always intelligently performed. Matthew Gordon is excellent as lead Joe Spud, forming a fine balance between a fun character and the inner sadness within him of being alone, and therefore when he embraces his friend Bob (Davy Bell), the awws that come from the audience are no surprise. Bell himself is a splendidly awkward, fat spectacled kid lacking in a true friend, and desperate to grab any new recruits or someone else to come last at running.

Jason Furnival has enormous fun as Dad and is equally enjoying himself as one-half of the bullying Grub twins (pure Dahl characters if ever there was one). As Dad he gets the best moment of the show spectacle wise, but that I couldn't possibly reveal! The character of Raj is brilliant, and Aosaf Afzal revels in it, heavy in a caricature of course, but simply splendid for it. We all know a Raj I think!

Emma Matthews channels more than a little Victoria Wood I feel as her dinner lady Mrs Trafe, serving up the most horrendous collection of food. While Bernard Mensah has less to do in his more minor, but important character Jayden. His dealing with The Grubs though is rightfully and uproariously greeted with enthusiasm by the audience.

Finally, special mention to Rosie Coles in perhaps the broadest collection of roles. Primarily as Dad's Mix 'n' Match girlfriend, but equally as strong as a teacher "The Witch" and the other half of The Grubs. Brilliantly contrasting characters, and superbly performed. 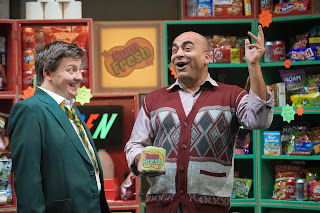 Billed half as a musical, Billionaire Boy just happens to throw in a great collection of songs as well, all good, some of them very good, and it's a credit to their quality that I noted one lad singing one to himself as we left the theatre.

The humour is, unsurprisingly, toilet humour at times, however, like Dahl himself, Walliams, and Neal Foster's adaptation gets the balance right. Also, like all kids shows, there is enough there for the put upon adults in charge of the minors, therefore for every fart joke for the kids, we get a reference to a gold bracelet from Ratners into the bargain.

The set from Jacqueline Trousdale is visually pleasing, using loo rolls as its design feature and had a multitude, seemingly endless, of compartments revealing the different locations we end up in. It's all kept swift by the director, also Neal Foster, and as a result, leaves the audience captivated.

I loved Billionaire Boy despite it not really being for me. It happily reminded me of my childhood and the tales that I read back there, and it is rather pleasing that this style lives on for this new generation.

There is nothing bog standard about this fabulous show.
⭐⭐⭐⭐Performance reviewed: Thursday 17th October 2019 at the Royal & Derngate (Royal), Northampton.