Review of Cirque Berserk at the Royal & Derngate (Derngate), Northampton 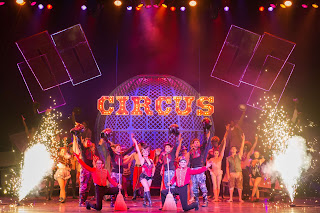 I have seen three previous circus performances over the last few years, following a gap of over thirty years, and Cirque Berserk was one of them, and their return two years later to Derngate is often remarkably similar to their previous show, but never less than remarkable in itself.

The concluding act, the motorcyclists of the Globe of Death I have now seen four times, and while I have now become blasé about it, I can still revel in the delight of others seeing it for the first time, including my companion of the night, who often thought the whole evening was full of crazy. It is true really though that you must have to be more than a little crazy to be a circus performer and do some of these outlandish acts we witness. However, big them up and applaud all the crazy people, because through them, a really diverse audience (the most this side of a panto pretty much), was thrilled to beginning to end. 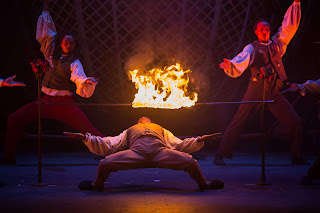 Cirque Berzerk covers most things you can think of from a modern circus, from acrobats, jugglers, a more modern take on a clown, and aerial performers, all package for a theatre audience. Unlike the tradional tented circus, there is absolutely no moment of an audience member being dragged onto the stage, if that might be a concern, this is a sharp and highly prepared circus, with no room for manoeuvre. This doesn't remove the heart from it though, it's still classic circus but with a more stylised sheen.

The performers are varied, but all remarkably skilled, the opening performance of stunning acrobat act, the Timbuktu Tumblers is amazing, and their relatively constant presence, bridging scenes often, is a nice touch. The Bolas Argentinas provide a nice bit of spark, literally, to their very traditional performance as well, and if Gabriel doesn't epitomise the crazy of a circus performer, I am not sure what will. 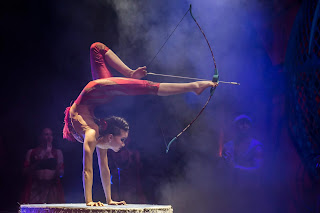 The Revolution Troupe once again returns with their amazing alternative tricks on a seesaw. Clearly featuring the most dangerous act, because the second act piece features the one and only sighting of safety wire, and watching it, you can see why.

The most major change to the evening for 2019 was a new "clown", in the arrival of the diminutive Paulo dos Santos. Standing just 3ft 6ins, he rises fair above his height in a brilliant collection of comic pieces, which the youngsters around me were certainly loving. This is clowning, but very different clowning, no silly costume, just fabulous physical comedy. Also, there is a double and glorious payoff in the second act, where he is given a nicely created emotional moment, and perhaps something you might never have seen from the circus clown before. Fabulous stuff. 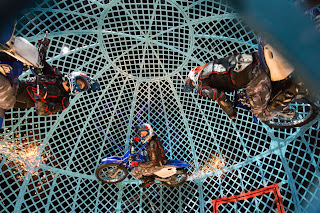 Perhaps my own personal favourite though is the amazing travelling circus sequence in the second act, it's a stunning collection of set-pieces, all conclusively traditional and runs the full gamut of acts you could imagine, from jugglers, knife throwing, a bit of foot controlled archery. Quick paced, inventive and superbly performed.

Sadly, the one main thing I had to criticise last time hasn't really changed, and that is of the slightly over atmospheric lighting, great at times, poor at others, mostly to the detriment of the aerial performers like Jackie, who is poorly lit, to not allow the remarkable skills she has to be fully appreciated. Elsewhere in the technicals though, they are a pleasure and a delight, the pulsing and incredibly well-selected music tracks bring an incredible amount to this mostly dialogue-free production. 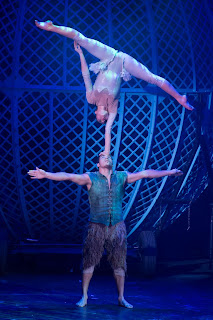 Cirque Berzerk is a short, snappy and slick evening, wrapped up within two hours. However, you never feel shortchanged in any way, because the whole production is packed to the rafters with acts and dealt with at such a pace, you as an audience member probably couldn't cope with anymore and it would also dilute the impact. The creative team of creative director Julius Green and producer Martin Burton have got it just right, the very perfect evening of non-theatre theatre, a bit of something very different that everyone should see at least once. And no scary clowns to boot!

Remarkable skills and feats on display, in a show that will thrill kids of all ages.
⭐⭐⭐⭐½

Cirque Berserk runs at the Royal & Derngate until Saturday 30th March 2019 and continues its tour. Details at http://www.cirqueberserk.co.uk/ 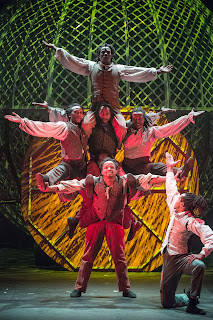