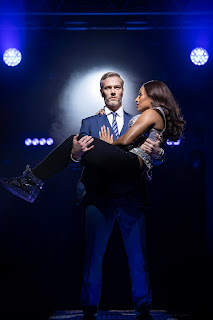 The 1992 film The Bodyguard starring Kevin Costner and the acting debut for singing megastar Whitney Houston, was a slightly average romantic thriller, which is really mostly remembered for its musical turns from Houston, so, it is perhaps surprising that it took a whole twenty years to make it's transition to the stage as a musical version. Premiering in London in December 2012, ten months after Houston's tragic death, the show has had great success around the world, and with this, it's second UK tour, has a recognisable face in the star role, of Alexandra Burke, former X-Factor winner (curiously not mentioned in her programme biog). 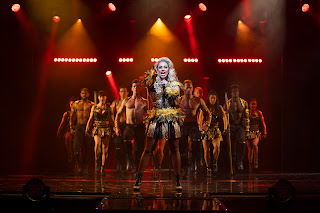 It's clear from the bold opening performance that Alexandra Burke as Marron is not looking to imitate Houston in the role, she performs the musical numbers her own way, and while the drama within The Bodyguard is often extremely light in content, she also proves more than capable in the acting department. However, Alexander Dinelaris' book based on Lawrence Kasden's screenplay is, very insubstantial. The Bodyguard is more about style than any substance, and that doesn't really matter, mostly. However, no one is coming out of a show like this with acting awards. 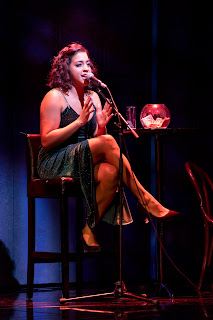 Burke is, as expected extremely strong in the singing numbers, however, it is worth noting that the best musical performance here does come from Micha Richardson as Rachel's sister, Nicki. While Burke delivers a concert-style performance, all breathy at times, Richardson delivers her songs in a much better-suited style for musical theatre, allowing us to actually hear the lyrics. She is the stronger of the two in the duet of Run To You and is quite exceptional performing Saving All My Love For You.

Benoît Maréchal looks the part as Farmer and is suitably reserved in the role, which allows his emotional chinks to be a pleasant surprise of performance. His performance in the karaoke bar provides the funniest moment of the evening. Well, the intentional one anyway.

This leaves the slight issue of the portrayal of The Stalker (Phil Atkinson), arriving top off, all muscles, and performed in comic book style in his dramatic scenes, it more often feels uncomfortable at times in the lightness with which it is portrayed. The "dramatic" scene in the second act is pure over-the-top panto villain with crashing doors, it lacks the drama it should have and feels it is using cheap horror movie style staging. 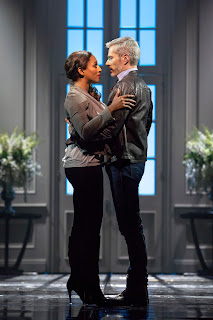 Beyond the slight hokum staging of some of the scenes, director Thea Sharrock brings a pretty slick production to the stage, Tim Hartley's set consisting, in part, of huge panels, sweeping in and out, opening occasional windows into scenes, or opening fully up to reveal the splendour of Marron's house.

Some of the musical sequences are at times far too over the top though, intense even, much more reminiscent of a full rock concert with lighting occasionally far too full on as well. During the club scene in the first act, personally from my seat in row HH, every few seconds I had a revolving light targetted directly at me. The musical numbers were nicely realistic, but perhaps for a stage show, they don't need to be perhaps quite as aggressive.

Michael Riley's orchestra brings superb music to the entire evening, and a nice touch at the end is a montage of views of each of the musicians, despite the fact that the side stage lights once again prevent you from watching this in comfort. 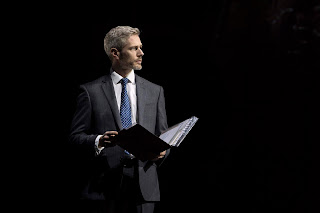 So, in a review packed with criticism, you would think the end result would be negative. However, it isn't really, at the end of the evening, even the slightly out of place encore (the fact that this is about a stalker and an important character is dead is quickly disregarded in the need to give a musical audience it's dancing moment), doesn't detract from the fact that The Bodyguard is a nice evening at the theatre. It is, however, not a cheap evening, with the very best tickets anywhere up to £70.

Fans of Burke, however, will, of course, love it, fans of a musical probably will, and fans of Houston's music certainly will, as for the general theatregoer, they might just possibly be less impressed at times. However, despite everything, if you have the funds, it still comes recommended for a surprisingly relaxed tale of a murdering stalker.