Review of The Remains Of The Day at Royal & Derngate (Royal), Northampton 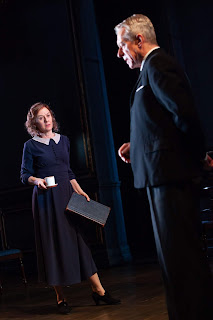 The Remains of the Day by Kazuo Ishiguro is regarded as a modern classic, a meander through the life of butler Stevens as he nears the end of his life, and looks back on many things that might have been different, and might certainly have been better. For this latest Made in Northampton production, director Christopher Haydon brings Barney Norris' sharp adaptation to the stage with more than a hint of style and slickness.

The central point from this production and your constant presence (he leaves the stage once to grab a coat, while one of the slick cast led set changes occur) is Stephen Boxer as Stevens. Perhaps one of the more remarkable performances on the Royal stage you might have seen in recent years, his clipped delivery and rigidness as the dutiful butler is simply astounding. So much is the brilliance you are witnessing as you see just a butler on stage, and not a hint of acting going on, that a couple of moments where the guard of emotion slips hit home so much more powerfully. Boxer is amazing, simply put, and every bit the emotion-free butler of the day. 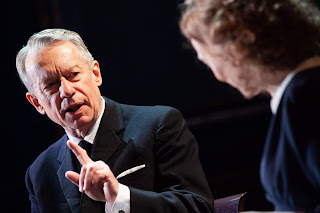 Not to say that this is the only point of brilliant acting going on, the whole cast here are top notch. Niamh Cusack as Miss Kenton the housemaid is often the complete emotional opposite of Stevens, seeing the wrong in some duties they have to undertake, and also beyond the job, as the butler is never able to, which sadly leads to where his life ends up.

The rest of the cast have multiple roles, and some of them are quite remarkable in their diversity. I challenge anyone to not be astounded by the moment that Sadie Shimmin leaves Mrs Taylor behind to become Mme Depont, I know I did a double take. 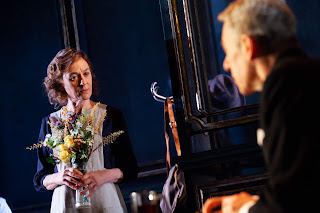 Miles Richardson is a brilliantly refined Darlington, an unlikeable character with his views, but also deadpan funny in his exchange with Stevens over godson's Reginald's knowledge of the birds and the bees. As Reginald himself, Edward Franklin balances his scenes of joviality and those over his godfather's opinions extremely well, making him one of the more likeable characters in the play.

Norris' adaptation is always slick with Haydon's direction, but early on it takes its time to get going, and it can take a little time also to get used to the timeshifts, although these are well signposted by Mark Howland's excellent lighting. Once you have got used to the style though, this becomes a much more entertaining piece of theatre, and the second half, in particular, is very strong, and never drags as a result. 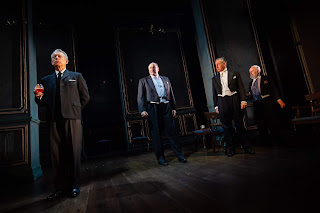 Lily Arnold's set consists mostly of huge great sweeping panels which Andrzej Goulding's video forms a nice backdrop on (despite sadly dropping out a couple of times during the performance). At the back is a slightly questionable decision to have a return of angled mirrors, seen very recently to better effect in the Made in Northampton's The Lovely Bones. It feels generally unneeded until perhaps that quite brilliant final scene, where you can almost forgive their presence, a moment that you will linger I suspect in many peoples minds.

The Remains of the Day in this form is remarkably solid, an emotional rollercoaster of a story that in principle very little happens. A slight memoir of a butler, but one with huge power. It is more often Boxer's show, however, none of this diminishes from a very strong cast. Highly recommended.

The Remains of the Day runs at Royal & Derngate until Saturday 16 March 2019 before touring until May. 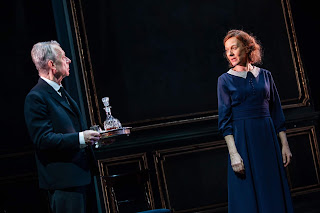