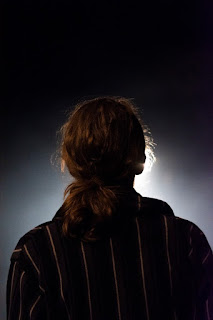 I can't quite remember how many versions of Charles Dickens' classic tale I have seen (maybe too many), but this dynamic, and at times, very different, version, was the second that I had seen in seven days following a Masque Theatre version the previous week. They couldn't have been more different in places, despite rigidly following the original story very well.

This production started with an uncharacteristic mingling of the cast with the audience, including a collection of non-period tunes playing (there goes #Whamaggeddon!). It has a mixture of weird and relaxed to it, and the assembled school kids certainly relished it and the mince pies, candy canes and chocolate coins that were being handed out.

As the cast disappeared at their due time, the scene is set for our narrator, Lyric Impraim, complete with dust riddled book to open the tale. She's a great performer, full of enthusiasm for the tale being told, and has a most brilliant cameo later as the turkey fetcher as the end of the story. She really manages to capture the opening of the show though, filling us with intrigue. 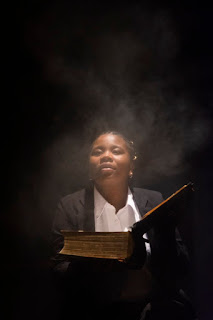 However, what of the main man though, a role we must, of course, deal with head on, and a role that many an actor perhaps dreams of getting the chance at. Chris Cutler plays Scrooge with great strength in some areas but feels limited in others. This being that it's tough to dislike him. Cutler's attempts at being nasty in his remonstrations at the poor put-upon Bob Cratchitt (a brilliant, nicely judged performance by Harry Oliver) never quite feel strong enough. Even without knowing him, Cutler seems a likeable chap, and that at times makes him difficult to believe as evil Scrooge on stage. Maybe it's the pre-show encounter that doesn't help when he appears with the audience genuinely warm. This said though, Scrooge's journey of discovery is superbly dealt with by Cutler, showing a jovial nature, and perhaps even later, what looks like being a strong comedic ability. A fine performance, just not quite perfectly cast maybe.

Ghosts of Christmas Past and Present are sparkily realised by Sarah Awojobi and Bethan Medi respectively. Awojobi has a natural command, demanding Scrooge hear her and effortlessly takes control of the situation. While Medi brings a different style, more relaxed and guiding. They nicely play against one another very differently and bring the journey of redemption powerfully to the stage. 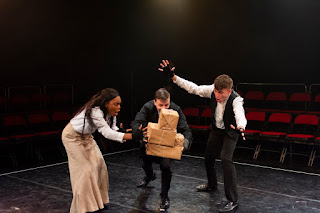 One of the stronger scenes of the play, is one you least suspect to be, mainly because of a hugely strong performance, that of Old Joe, played by Esther Bartholomew, it becomes an absolute riot of comedy and defines a curious good and part of this whole show. Comedy is where it at times fails, with some of it not quite gelling and occasionally forced. I did appreciate that painfully awkward scene of silence, but, it did, in the end, go on too long for instance. There are more than a few scenes within this version that fail in their attempts at humour.

Then we have the elephant in the room for me, Ebeneezer and the Scrooges. Opening act two is a live gig where Cutler, still as Scrooge gives us a couple of numbers with his band. I love both tunes they performed, Carol of the Bells and Fairytale of New York, and while it was excellent music, it simply didn't work for me. This coupled with seeing Scrooge set it all up during the interval, totally broke the character created in act one. Despite my reservations though, I am sure many loved it.

What I did like though from the music were those perfectly in character with the show. The quality of singing in this production was tremendous and the mixture of carols brought both joy and poignancy to the whole production. 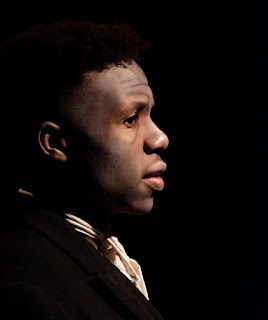 Returning to the performances sees finally mention of two immensely strong ones, Jacob Marley is a commanding presence due to a stunning performance from Michael Gukas. He depicts Marley's despair with true emotion, and clarity of delivery is second to none. Meanwhile, while despair is Gukas' strength, every time Amy Jane Baker appears on the stage, it's lit with a captivating turn of enthusiasm. Both in narrator scenes, but more so as the larger than any life Mrs Fezziwig. Both quite brilliant performances and I am already looking forward to what they bring to the stage next.

I liked most of A Christmas Carol, and the only bits I didn't like were what I felt were misjudged, rather than poorly performed. It's always nice to see the endlessly told tale told differently, and that without a doubt is what this production did. As always, it is better to fail trying something different, than fail by doing the same old thing. 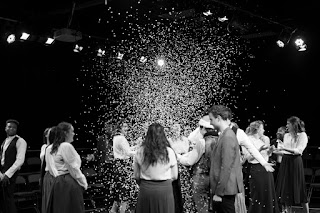