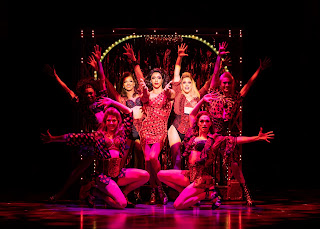 The hit musical travels from Broadway to the West End, to, erm, Northampton, as the first ever British tour of Kinky Boots launches in its spiritual home (fact fans, it was actually a factory nine miles down the road in Earls Barton that became the home of kinky boots).

The 2005 film of Kinky Boots is a relatively minor old British film and didn't exactly set the box office alight, but it has a wealth of homegrown acting talent (including a certain Chiwetel Ejiofor as Lola, on his way to Oscars success a few years later). Personally, I really loved it (although its depiction of Northampton is overtly weird), and as well as some great performances, it was sharply written by Geoff Deane and the always remarkably reliable Tim Firth. Therefore it comes as no surprise that the basis of their work is the best part of this stage musical version of the film. Despite this being a book by Harvey Fierstein, the best lines and situations are plunked right from Deane and Firth's work.

In fact often where this musical version deviates from the original film is often where you get odd moments that don't totally work. For the purposes of musical, the discount shoe trader of the original film has inexplicably become a bar musician in his spare time, the wonderfully delightful character of Lauren in the film has become an unneeded extra, overly, comic character, who becomes more nauseating than entertaining (and dare I say, just a cheap and annoying caricature of the show's music and lyrics writer, Cyndi Lauper). One alteration from the film which definitely does work though is making the Lola and Don challenge a boxing match, I doubt an arm wrestle would have been as easy to make an interesting scene from on stage.

Of the performances, it is a mixed bag, with occasionally this being a surprisingly poorly sung show for a major tour. The standout is without doubt Callum Francis as Lola, although even he seemed tremendously nervous during his opening number, a surprise considering he has made the role his own recently on the other side of the world. It doesn't take long to see why he was an award winner in Australia though, as his Lola is a fiery delight, exhibiting all the larger than life requirements of the role. He also deftly does the switch to Simon from Clacton, the awkward man in men's clothes that can't front up to Don (a quite brilliant Demitri Lampra) in the same way as when he has a dress on.

Joel Harper-Jackson does his best in the generally underwritten, and to be honest, rather boring character of factory owner Charlie. The show just about gets away with it, as he becomes the perfect balance for the mega entity that is Lola. There are issues with some of his singing, strength being one of them, and there is no doubt that he is a victim of the once again rearing head of sound balance. Often his lyrics are washed away by the volume of Patrick Hurley's excellent, but too loud 9-piece orchestra. It really is time that the shows sorted this out as it is becoming an almost constant problem. 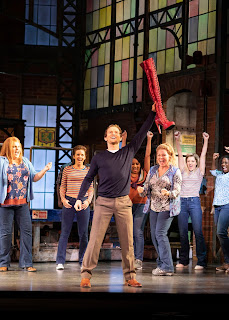 Paula Lane as Lauren and Helen Ternent as Nicola, the two women in Charlie's life, struggle at times with the material, and it's ironic that for me the character of Nicola ends up being the more interesting than the irritating Lauren, but that isn't really saying much.

The enthusiasm of all the Angels is superb, and lighten up every scene they, and indeed Lola are in, making the show so much better as a result. Finally, from the cast, there is a quite brilliant turn from Adam Price as factory foreman George, bringing much of the comedy to the show beyond Lola and the Angels. As a final comment, accents were generally a bit Brummie at times, rather than Northampton, but, we are a bit of a unique dialect around these parts, so, I won't complain too much about this.

Comedy is where Kinky Boots works, much of it from the characters already established, yes, you guessed it, in Deane and Firth's original. Where Kinky Boots becomes troublesome for me is the quality of the songs, a weird collection that for me never jells. Often taking far too much influence from other shows rather than getting its own distinct sound. If I never hear Step One or The History of Wrong Guys again, I will die happy. Having said that, there are some brilliant numbers as well, I could listen to What A Woman Wants over and over again, and Everybody Say Yeah forms the perfect culmination of the first act.

The choreography as well, from Jerry Mitchell, also the director of the show, based around this closing act number forms the very best of the show. Full cast on stage and a brilliantly realised sequence involving the factory conveyor belts form one of the best scenes that I have seen in any show. The staging of the opening of the second act around What A Woman Wants is also sublime (and handled expertly by the cast as well, being performed either side of a full evacuation of the theatre following a fire alarm on the evening).

The stage work, as well as the comedy, is Kinky Boots strong point. Numbers are lively throughout and this upon David Rockwell's stunning set, depicting all the grime of a factory and then the glamour of Lola's nightclub and Milan beyond, makes the whole show a visual delight.

Overall, Kevin from Northampton really wanted to love Kinky Boots much more than he did, but unfortunately, the added songs generally don't do enough to make a fun film into a groundbreaking musical. The audience, however, were up on their feet at the end, it's no surprise, they always are for a musical, but Kevin from Northampton has I am afraid seen much better and stayed very much seated.


Quality comedy but doesn't quite have the tunes to make it a musical standout.
⭐⭐⭐½