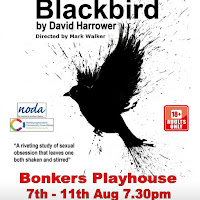 Seeing Blackbird by David Harrower, presented me with my first visit to Bonkers Playhouse in Kettering. Opening just this year, it has become the home to Bonkers Theatrical, a group set up in 2009, and the cosy little venue also plays host to a wide range of touring productions, including those from White Cobra and Next Page Productions. It's a smart and really lovely little venue, complete with bar, seating of up to 40, and an impressive stage and bar area with some innovative ideas. However, what of the play?

Blackbird by David Harrower is a tough and gritty little piece, a ninety minute one act, but here split in a nice location. Una has found, by accident, Ray, who 15 years earlier had sexually abused her. He then a 40-year-old, her, just 12. It's an uncomfortable premise to form a play from, however, the sharpness of the writing, while definitely making its audience uncomfortable, never makes it unwatchable.

What it does need though are two performers of some ability and here with David Mander as Ray and Susan Hackett as Una, the show has that. At no point is this little piece perfect, but at its centre are two confident performances. The best of the two is Hackett, who presents the depth of the trauma that she carries with some scenes of brilliant emotion. Her extremely long monologue in the second section is delivered extremely well, and although it is wordy, the director, Mark Walker, keeps our attention through it with just slight movements at significant times, but never excessively to detract from the quality text. Mander meanwhile has the tough deal, it's not a nice character, that goes without saying, and at times, I did feel the role was a tad underplayed. He remains remarkably placid during Una's long speech, and be this director's choice or in the original piece, it seems odd that such a thing would occur without some more emotion, if only beyond the fixed facial gesture. However, between the two, this is a remarkably polished piece of drama from the pairing, with the explosive scenes becoming extremely intense at times.

Staging is clever, on a simple but well-designed set, and those explosive scenes are very well handled, with the front row missing, there is more effort to bring the nature of this outward into the audience space. All in all, with simple sound use, the whole production does Harrower's play full justice and comes as a pleasant surprise for my first visit to Bonkers and this theatrical group. I look forward to seeing future offerings from the group.


Blackbird ran at the Bonkers Playhouse, Kettering between Tuesday 7 and Saturday 11 2018.

For full details of the Bonkers Playhouse visit their website at https://bonkersplayhouse.co.uk/