Review of UoN Fringe: Wonder (W?nder) by Lamplight Theatre at The Platform, Northampton 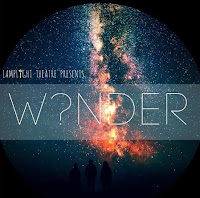 I have to say as an unreligious person, I approached W?nder with a certain amount of trepidation. Performed by Naomi Hollands, an evangelist in training, as well as an actor, it comes from her theatre company Lamplight, which has in its description that it aims "to give the student population a chance to explore Christianity through the use of theatre".

It was though slightly less of a concern, in reality, this show is presented at a nicely balanced level, which explores more what we find ourselves in life as things of "wonder". We are asked to write down on a piece of paper at the start of the show, where we see the wonder in life. It's an idea that is briefly used later in the show, as Hollands reads out three random ones from the bowl. However, it gets you thinking before the show proper begins.

Hollands takes us through several characters including a young child and an older, more officious and organised person, before finally falling into a very personal piece as herself. Indeed extremely so in it's content and you have to applaud the nature of laying some of the content in such a public environment.

It's simply done, nicely performed and far from preachy in its content, dealing more with how we gain enjoyment from life rather than banging the religious angle. It's also very funny at times, and Hollands performs the whole piece in a confident and believable way, and despite my initial concern of the themes, I left thinking about the themes raised, and from theatre, that is the most wonderful thing we can receive. It very much ticked the box of what I wrote on the piece of paper at the start, "creative ideas".