Review of UoN Fringe: Only The Introverted by Set It Straight Theatre at The Platform, Northampton 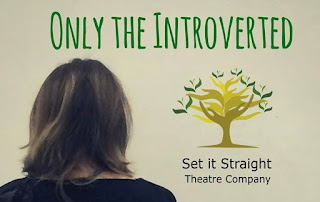 In the Balm In Gilead, Bethany Williams, the solo performer in Set It Straight Theatre's Only The Introverted, was a quiet force to be reckoned with, creating a delightfully gentle character within an often cruel and violent world. In Only The Introverted, she explores a world, that I personally am very familiar with, as if anyone ever wished to diagnose me, I think I would be declared an introvert.

This whole play from its opening of the emergence out of her shell and to its end is actually just sweetly created. The bursting forth of a million little beeps from a phone is an understandable thing in all of us now, and the response that this introvert character has to this is equally understandable.

Even the daily grind of life, travel to, and travel home, from the eyes of someone who may need to live in this world, but doesn't really wish to, is lovingly created. The arrival of then perhaps the crowning glory in Shelly the tortoise is only going to enforce the loving that an audience could have for this show.

While this is both a theme show and an obviously very personal one, it never looks to preach. It guides us by hand gently through a subject that many would never understand, advising rather than hammering home its case, perhaps very apt considering its subject matter.

Williams is a delight once again, a captivating presence on stage, and without a doubt one of the strongest performers in this group, despite almost the innocence of performance at times. It's nice to get the feeling sometimes that someone is stronger than they think they are, and here, like a few of the best students from previous years, Williams is one of them.

I left Only The Introverted with a happy face, it's a delightful little show, which suitably approaches it's subject gently. Just lovely.