Review of UoN Fringe: Lawmen by Flux Theatre at The Platform, Northampton 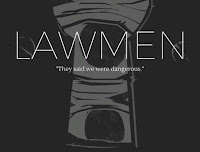 Way back in April 2014, No Way Out was the first production that I saw from local amateur group Masque Theatre, it was a version of Jean-Paul Sartre's Huis Clos (No Exit), and four years later, the University of Northampton group Flux Theatre provide another version, presented in a far more claustrophobic style and modernised considerably.

Seated in a circle, barely more than five metres in diameter, the three actors. Amber Jade Harrison, James Grayson and Ross Bayliss perform an adaptation of Huis Clos, titled Lawmen. This becomes perhaps one of the closest proximity productions that I have ever seen, and likely to, so much so, that often the actors are even seated in adjacent seats. to the audience.

We, the audience, are not there, of course, it may be close contact, but these three characters are in their own world. These three have been thrown into this Sartre inspired world of lies, and deception. Who are the truthful ones, who is the controlling menace? We do not know of course until the end, so, as an audience, we go through there fears as well.

As well as being exemplarily staged, this is also stunningly performed. With such proximity, there is no escaping close scrutiny of the audience, and as such, it is key for such solid performances, here we can see the facial mannerisms in total detail, and do we get them.

There are no weak links here, we have Grayson's powerful and violent character, perhaps being played by the other into aggression, perhaps actually the guilty one? He has been an amazing presence on stage in all previous shows, and here Grayson he is no different. Stunning work.

Bayliss plays the more innocent feeling character, no less disturbed by the world he finds himself in. He provides the perfect balance against Grayson's character, the sort of everyman character that we as an audience can perhaps latch onto more?

Finally, we have Amber Jade Harrison, throwing even more confusion into the mix. Harrison is the most controlled and measured performance on display here, quiet and contemplative, amazingly so at times. The gradual exposure of what she has done is expertly eeked out, and the impact that the revelation makes is all the more powerful due to this.

I really loved Lawmen, it is intense in your face theatre that has three brilliant performances from the cast. Its power is brought home in the final sequence of a most spectacular light show and theatre and leaves its audience understandably reeling as a result. Brutal and really quite brilliant.