Review of Shadowlands by Moulton Players at Moulton Theatre, Northampton 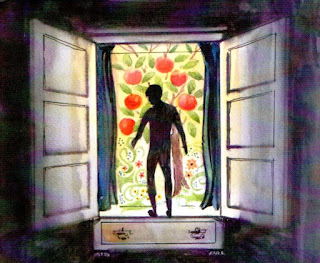 It has to be said that the world of Narnia, as created by C. S. Lewis, generally passed me by when I was young. My childhood reading generally came more from the more crazy side like Roald Dahl, therefore I have neither read, or I believe, ever seen any interpretation of Narnia. Not to say that my knowledge doesn't reach to the famous wardrobe, which in its way, has a curious, but fulfilling existence, in William Nicholson's Shadowlands as well.

Shadowlands deals with the relationship between C. S. Lewis and American writer Jo Gresham (Davidman), from burgeoning, to love and then her sudden illness. It's a lovely endearing and gentle tale, which in this production from Moulton Players, is mostly successful, albeit it occasionally clunky, especially in its very long first act.

As C. S. Lewis, Alex Page-Bailey gives a confident performance in a very large role. It has to be said, it doesn't start well, as the play opens with a long, and ponderous lecture to the audience, as part of Lewis' world of Christian apologist. It's a horrid, relentless opening to a play, that frankly deserves better. It also has to be said that it isn't Page-Bailey's finest moment, as the delivery of this piece has limited life in it, making it feel much longer as a result. It's curious that the second act opens with a similar scene directed right at the audience, and here, the emotion pulls through and the whole speech is pushed right through the audience as a result. More of that energy at the start of the first act would have been a delight. During the standard play, away from lecturing though, Page-Bailey is great, full of the slow building emotion, of a man who has reached almost sixty, seemingly never truly loved before.

Joy Davidson is played in a solid, confident way by Louise Drage, instilling much of the emotion into the role. She is definitely a chilly character at times, and you have to wonder, especially in the overlong first act, what actually makes Lewis so captivated by her (albeit, underlying at this stage). However, by the second half, the emotion and connections are much greater, because the relationship has become more lighthearted and carefree, ironic considering the turn of events.

Much of the enjoyment of this play comes from the second act, the first is woefully overlong and at times ponderous, but, the second act pays of for the patience of its audience with some lovely scenes between Davidson and Lewis.

There are other nice performances in this production beyond the two leads, Iain Gillies gives more life than the one-dimensional character of Major W. H. Lewis (Warnie) almost deserves. It's underwritten and quite characterless in dialogue, but Gillies breathes life into the role, including his simple, silent reactions garnering much audience appreciation.

Peter Laughton is great as the sharp and rude Professor Riley, happy to state his opinion of Lewis' new lady, but not so keen to take Joy's rebuff, simply performed, but entertaining at all times. Andrew Wintersgill also entertains, disgracefully stealing a scene from under the noses of the leads, with his, more than willing to sample the drinks, waiter.

Finally, special mention must go to Charlie Leonard-Pepin for a truly delightful little performance as Joy's son, Douglas (curiously Shadowlands dispenses totally with her second son, David). He is a wonderful presence on stage and exhibits everything of a star of the future, never switching off on stage, even when just in the background.

The play at times doesn't allow itself to be overly dynamic, with quite a few scenes rooted to locations with little chance of movement, however, director Stephen Loveless does keep the play moving with locations created simply by simply locking them to fixed places upon the stage and effective lighting changes. It allows the play to flow surprisingly well. The wardrobe of the centre stage is nicely realised also, becoming a character of its own.

Shadowlands is a sweet play, and in this production, nicely performed. There is no question for me that it is far too long, with the first act outstaying its welcome by a good ten minutes at least. However, the sharper, much more entertaining second act makes up for much of the disappointment of the first and leaves the audience entertained, despite the nature of the play.