Review of Hamlet by the Royal Shakespeare Company at Royal & Derngate (Derngate), Northampton 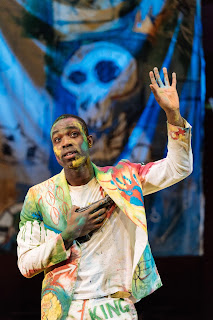 I am personally all about making Shakespeare accessible, I take the Emma Rice line, that many were not keen on, that after a few hundred years, it's perhaps worthy of mixing it up a bit to make it more meaningful to a modern audience. I have a feeling the man himself would have no qualms about seeing his classic Hamlet transposed into a garish multi-coloured world, set in a much more hip place.

The Denmark that we see here and that is still referenced, is now very much an African country, and not just because of the heavy black actor casting, this is all about a style and a carnival feeling to many of the scenes. Music is provided by tribal-like drums, and characters stalk the scenes carrying handguns and rifles, bringing a modern feeling to the conflict as well. This is certainly not the "rotten state of Denmark" that most Shakespeare aficionados are familiar with.

Characters are changed drastically as we have more cocksure, swaggering, modern feeling to the individuals, especially Hamlet himself, who weaves between an uncontrollable beast bent on revenge, to a kid who still hasn't grown-up. Imagine Harry Enfield's Kevin playing Hamlet, and you will get a feeling of how childish this Hamlet is. Well, perhaps don't, but I am sure you get the idea.

There is no question that Paapa Essiedu, here playing Hamlet, is an actor of exceptional skill. He has the audience in his grip from his first appearance, and in his first scene, able to project a gushing flow of tears as he imparts his first, of many, soliloquies, "O, that this too too solid flesh would melt". The emotion within this is epic and lays the path for his entire performance. His range though is extraordinary, this character has such a sweeping diversity, yes, in this Hamlet, we have the kid who ain't "bovvered", the son bent on revenge as his state of mind breaks slowly down, and then we have a jovial one, pulling comedy where it almost shouldn't be, in this darkest of plays. We laugh as he drags the body of Polonius away when we shouldn't and we find light relief in the Yorick speech, due to the buoyant feel it is given, the lines delivered as a joyful memory, as opposed to the sadness of times past. This Hamlet is also a chilling (in the cool sense) Banksy character as well, willing to mock his elders, with graffiti upon official drapes and men and ladies toilet signs upon the thrones, of the court variety, not the cubicle kind. An extra little mocking one of a pensioner as well to adorn Polonius. This Hamlet is one cool kid, that's for sure.

While Essiedu is the incredible structure where all of Hamlet resides, he is surrounded by an equally impressive cast. Mimi Ndiweni gives a gutwrenching performance as Ophelia, taking the emotion and break down to create the sorrow of this play away from Hamlet himself. This is where the Hamlet of old lies and Ndiweni is impressive. More humour comes in the hands of Polonius, and his time of brevity. It's an extremely entertaining performance from Joseph Mydell.

Elsewhere, we journey with James Cooney's Horatio in a buoyant manner until the bitter end, where his collapse is complete as he cradles his bestie in his arms as Fortinbras arrives. This once and always lively, sprightly character, is given eminent depth by Cooney at the dying embers of the play.

Director Simon Godwin brings vibrancy to scenes which shouldn't have them, making this Shakespeare all the more stirring and relevant. Upon Paul Wills striking set, epic pillars and sliding sections, and to the background of swift scene changes and accompanied by striking music, some brilliant realised live by the drums and an assortment of other instruments, this is a captivating show, even if you are a very casual Shakespeare.

This Hamlet is for the modern generation, a broad-stroke production that might often not please the old guard. However, there is always room for everything within the world of Shakespeare, traditional will never go, and neither should this freedom to experiment. Paapa Essiedu's Hamlet is exceptional, and that alone is one very good reason that this RSC production should be put in your diary.

Hamlet runs at the Royal & Derngate until Saturday 3rd March 2018 before continuing its tour to Hackney, and erm, Washington D.C 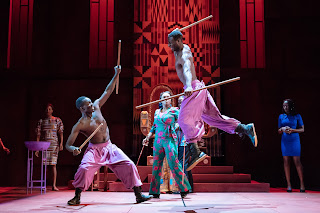