Review of The Rover at the Holy Sepulchre, Northampton 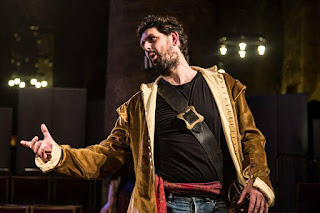 I have seen very little restoration comedy, and with Playhouse Creatures early this year, very much Restoration period, Masque Theatre has provided much of it this year, with this edition of Aphra Behn's 1677 play The Rover or The Banish'd Cavaliers. Behn was quite a landmark writer, recognised as one of the first women to make a living from writing (and has an extraordinary real-life worth researching). Perhaps having watched The Rover now, you can see why her work might well have been accepted back then. It is suitably bawdy, really extremely rude at times in places, definitely farcical (with disguise situations aplenty that wouldn't fool a blind man with a blindfold on) and perhaps most importantly, makes the woman much of the time the victims in the frequent sexual exploits. It clearly wasn't being anything that a man of the time wouldn't write, and probably means it lay a suitable path for success for Behn as a result. 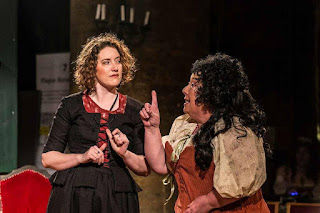 The Rover itself is tremendous fun, ploughing a story of ridiculous antics which many would be more familiar with from Shakespeare comedies, and never knowingly being on the right side of believable. It matters not though, this tale of a sexually adventurous navel captain, Wilmore (The Rover of the title), and his band of banished cavaliers simply entertains in its preposterousness.

Davin Eadie plays The Rover with immense roguishness, and culminates a tremendously successful year, maybe not with his strongest role, but assured and brilliant characterisation as always. His star has risen much this year, and much like his regular stage companion Julia Langly (Hellena). Langley and Eadie have worked three times together this year and they have formed a captivating stage partnership to revel in. They once again spark off each other well here and have clearly formed one of those magical theatre relationships that are often a challenge to find, and perhaps now an equally thing not to exploit (but perhaps be aware of too much of a good thing). 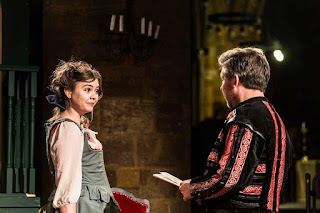 If Eadie and Langley's stars have already risen this year, perhaps another on the horizon is that of Elizabeth Palmer, here as Hellena's sister, Florinda. In a much larger role, following minor serving honours in Antony & Cleopatra, Palmer perhaps shows an inkling of what might be to come in a hugely watchable performance. Completing the siblings as Don Pedro is the always professional and often just quietly brilliant Matthew Fell. Perhaps some of the safest hands in Masque's group of actors at present, Fell broods and dwells on things quietly as Pedro, and then shows the usual brilliant deadpan comedy timing where needed (sword size and saving his own skin, spring to mind).

Elsewhere, Ste Applegate brings great exuberance into the swashbuckling role of Belville, while each time Roger Toone briefly appears as either Page or Sancho, he manages to steal the scene from whoever is present. His second character, while not his line, generates my absolute favourite of the play though, "he might be a Justice of Peace in Essex, and is but a Pimp here". 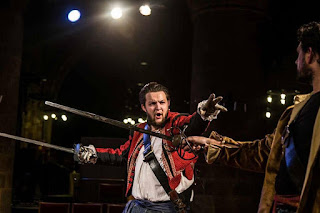 Delivering that line, is Michael Street, in an absolutely brilliant turn as the comic foil Blunt. The scenes where he finds himself falling into a trap after succumbing to the allure (unsurprisingly) of Lucetta (Bernadette Wood), are some of the best of the play and his later reappearance while humorous at all times, is as ever of this kind of character, also sad a little as well, Street though, is truly brilliant in the role.

Lisa Wright creates the tremendously evolving character of Angelica Bianca with style, managing to bring a gentle balance to the role as it progresses, perhaps the most emotionally of the play, through the series of life paths.

Finally though comes special mention for Alex Rex as Moretta, Angellica's lady in waiting. In the few years, I have followed local theatre, I haven't until The Rover seen her potential of what I knew has come before on stage, but in what in theory is a relatively minor role, Rex recreates ir as a star turn, even making scene changes into a performance piece, rather than just a necessary requirement, really very brilliant in every way. 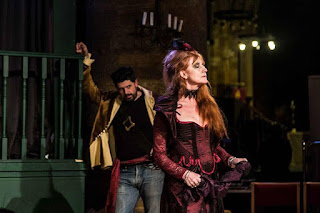 Director David Chappell grabs the often challenging round of the glorious Holy Sepulchre and shakes it into a tameable beast. Very rarely do you feel you are hugely missing out on the action, no matter where you are seated, this show uses with super success every "corner" of the space available.

Heading into The Rover, my knowledge was zero, and after leaving, I had found a surprising love for this new, almost Shakespeare-like play. Masque have created a lively and vibrantly coloured version that entertained from start to finish and is well worth catching before it sails off.

The Rover is performed by the Masque Theatre and runs until Saturday 16th December 2017 at the Holy Sepulchre, Northampton.

Details can be found at http://www.masquetheatre.co.uk 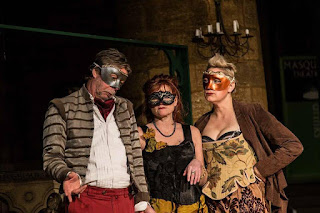