Last week at The Playhouse Theatre, Masque Theatre was presenting a one-act season of three plays directed by new and mentored directors. It offered a perfect opportunity (especially on Gala nights where all three were performed) to see a highly contrasting collection of three plays, ranging from a theatre of the absurd, period Coward comedy and a rock star beast of a play.

Theatre of the Absurd is not something that I am totally familiar with and based on this production I am still not that certain I am to be a fan. This isn't the fault of the play itself, however, but more of events on the evening I saw it.

It starts extremely well, a maid of a professor (played with scene-stealing relish by Katy Corrie) 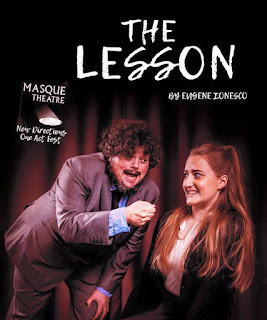 welcomes a pupil at the door played by Masque newcomer Caitie Pardoe. As the professor, Chris East not only looks the part, but has the nervy, and edgy energy, to make it work in the movement.

The sharp and witty repartee from both East and Pardoe is clever, entertaining and every bit as surreal as this "absurd" material probably should be. Weird conversations about our star pupils ability to add sums to perhaps infinity, then become transposed in an inability to subtract three from four. It is really all bizarre, yet also weirdly entertaining.

Then sadly it all comes off the rails as unfortunately many of the lines depart Chris and with no entirely smooth plan for prompt backup, it all becomes a bit of a mess. It's at this point where I myself lost the thread of the piece, because of the constant break of pace. Personally, I don't have a problem with prompts (although the excess here did become an issue in the end), this is amateur theatre after all and these things happen with the lack of time available. My issue is how the performer handles the prompts, for me, I want to see them received and just get on with it. Once the character is broken as it was here with playing to the audience, the belief in the piece has gone. Perhaps if your audience is all your mates, it might work, but if not, making a performance out of it devalues your audience and potentially damages the prospect of their return.

When it was working, it was great. Chris was excellent, which only made the end result, the more disappointing. As for newcomer Caitie, it was an assured and confident first appearance, solid and great character and clearly one to watch.

Direction from Lisa Wright is smooth and as good as perhaps the material allows, dealing with the main issue of having one of the characters seated for much of the play. It leaves the figure of the eye on the pacing Professor, making this whole set very much his domain.

For my first encounter of Theatre of the Absurd, The Lesson doesn't put me off and makes me interested in seeing another, well, one at least. It's not going to be for everyone, much like I was discussing Pinter last week, but for a short one-act, it's weirdness doesn't outstay its welcome.

Sandwiched in the middle of Gala night was to be another first for me, a Noel Coward play, and like Ionesco (although perhaps as far from in content), I was unsure of whether I was to be a Coward fan a the end of it, but happy to observe a second (brief) encounter perhaps at some point. 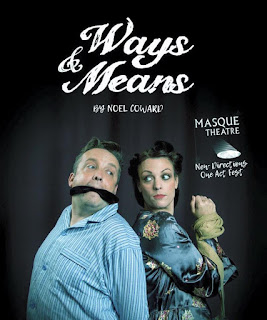 It is, as to be expected, frivolous fun, and not only does it have an incredibly confident cast, and looks rather special costume-wise, it also has a dynamic and brave bit of directing going on from Emma Robson. You can see the direction a little, with moments where most of the cast are on stage, rather purposely placed to prevent blocking, rather than it looking natural. However for Coward, and certainly the period nature, it just looks rather right in a prim and proper way. So while Olive (Tamsyn Payne) standing front of stage puffing away on her cigarette, seemingly absent from the rest of the cast might appear odd, it still looks rather, to use a suitable word, spiffing due to the aloofness. Other brave decisions are made on the lighting, which leave the stage actually quite dark at times, but which is actually perfect for the scenes and a boldness I appreciated greatly. Set changes are performed sublimely in character by Nanny (Beverly Webster) and I absolutely loved the dynamic approach the curtain call made, not something I recall writing very often for a play.

All of the actors fill their roles rather excellently, capturing the period with aplomb. As a team Sherrilyn Reynolds as Stella and Andy Rowe as Toby work gloriously together, looking both the period and delivering Coward's characters with great skill. They never break character and Sherrilyn especially is tremendously assured considering this was her ever performance.

I enjoyed Way & Means, perhaps more for the visual appeal rather than the rather silly tale it told, perhaps I am not a Coward fan, perhaps I am, we shall no doubt find out in time. However, it was very well staged and brilliantly performed, and that at the end of the day is all that matters.

Cowboy Mouth would probably come as a shock at any time, however, heading to the stage following the frivolity of Coward, when the strongest moment is a comic mention of a bit of prostitution, makes it all the more shocking.

It's not a particularly nice play, littered in substantial quantity with maximum level swearing, but that 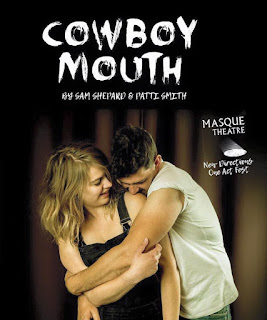 doesn't mean it isn't a bad play. Despite its constant vulgarity, there remains a lyrical flow to the lines, helped much by the organic and almost tribal at time delivery and movement of Julia Langley (Cavale) and Davin Eadie (Slim).

This is a piece of exceptional performance from the two, creating a stage magnetism of often disturbingly realistic levels. Because of this very level of performance, you rarely feel you see the direction of Tom Hendryk, despite it clearly being there. In actual fact, if you don't see the direction and the whole piece just feels natural, that is perhaps for the best. These places are the character's environment and perhaps not always should they do what the audience either needs them to, or expect them to.

From the three plays, this one was my favourite simply due to the exceptional performances, this despite it hectic nature and surreal parts often making you a little unsure what is going on, and for me it would be one that I would wish to see a second time to try to pick apart some sections I didn't quite get the first time.

However, it proved the perfect ending to the Gala Night of New Directions as I can't think how anything would have followed it, and indeed whether the audience would have been in a fit state to even watch in any case.


I liked New Directions, the concept, a lot, perhaps more than the plays chosen, but a chance for such variety was great and even the opportunity to see rarely performed one-act plays is also something to relish in. I very much look forward to seeing more in the future. 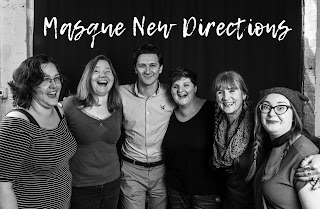