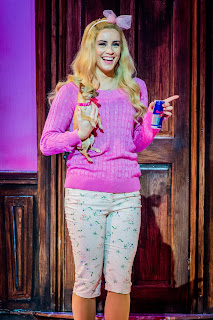 As I settled down in my chair at the Derngate to see this touring production of the musical Legally Blonde, I generally had no idea what I was letting myself in for. Never having seen the film, read little up on the show, as is my want, and sitting in a clearly unbalanced gender demographic, this show was quite clearly not targeted at me.

As the opening number, a catchy, but the incredibly screechy song, Omigod You Guys was performed, I was not, let's say, won over at first. However, it was clear that this just served as an overwhelming and ridiculous setup to the boldness of the show. The second number, Serious was a much better experience and genuinely funny song and throughout the tracks to come, there was much better to come.

Our lead is Elle Woods (a charming, bubbly Lucie Jones), a typical caricatured blonde whose sole aim in life is to get the hand of her love in life Warner Huntingdon III (Liam Doyle). When he breaks up with her in pursuit of someone "serious" to put on his arm, she targets enrollment at Harvard in pursuit of him. 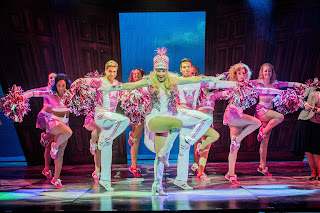 It's all very lightweight, but fun, and the excellent cast bring it all to life. Lead, Jones is hugely entertaining and great vocally across all the songs and able to maintain the energy throughout the often surprisingly physical choreographed numbers performed during some of the songs. The dance routines from Anthony Williams (also director) and Dean Street actually bring a huge amount to the show, offering great physicality to the stage as well as comedy visions of dancing Harvard admissions officers or old ladies bending and snapping at Hair Affair.

I enjoyed and was honestly surprised by Rita Simons as Paulette Bonafonte, I have a soapdar of suspicions sometimes with audience grabbing casting like this, but this one works and she has a very surprisingly strong singing voice. Perhaps a lot less exciting was Bill Ward as Professor Callahan, not necessarily a lacklustre performance, but feeling like a bit more effort could have been put into his execution by numbers act. This challenge I would also direct a little at Liam Doyle and his rather boring interpretation and yes, stage presence as Warner. A little dull to be honest, which even if the character is clearly meant to be, I feel sure more life could have been put in. 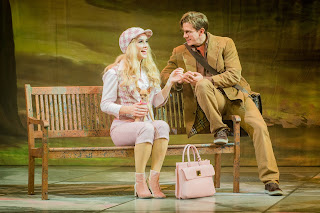 None of this could have been directed at the quite brilliant David Barrett though as Emmett Forrest, a charming and well-controlled performance, quietly being excellent in every scene. He created the perfect shabby but loveable persona to perfection and I note from his biog he has been in Little Shop of Horrors, and if that wasn't as Seymour, it should have been.

From the others, Ben Harlow was clearly having too much fun as the delivery boy Kyle B O'Boyle, egging the audience into a frenzy with his poses and struts. Meanwhile, I also loved Rebecca Stenhouse's Margot including that amazing Whipped Into Shape routine.

The ensemble is strong and for a touring production nicely large, often I have challenged some touring shows for being able to pack the cast into a minibus, that's not to be levelled here. Also, there is no question that the costume budget was skimped on, with a flourish of changes on offer including a specific new set for the substantial and impressive curtain call. 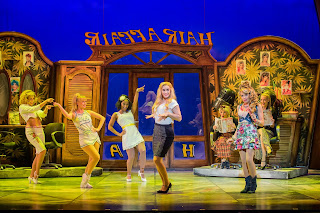 There is limited drama in the play, as this is lightweight stuff. However, it's interesting to note that one particular scene between Elle and Callahan in the second act felt more impactful in light of recent news. For those never having seen the show, I am not going to spoil it, however, the effect that the one single moment had on the audience felt quite significant.

Technically opening night had a few issues going on, pre-interval sound quality was more than a little dodgy with balance all wrong and lyrics often disappearing into the wall of sound from the orchestra. A supreme quick fix had occurred post interval seemingly settling all issues and that now is what you will have to expect for the rest of the run here. Just a shame that the show wasn't ready at curtain up, soundwise. There were also the occasional misbehaving bits of the set as well which was surprising considering this has been touring a while. No one wants to see a stagehand laying on the floor clinging for dear life to a drifting bit of set, it's not pleasant.

Techincal issues aside, I know that a few friends didn't enjoy it as a show, and perhaps it is at times a little tacky, however, to me that felt the point of the whole thing. The source material I don't believe is very highbrow and often musical theatre doesn't need to be (and to be honest rarely is) clever, it is often at its best when it is frivolous and pointless like Legally Blonde is. At odds with the fact that I probably shouldn't have, I loved its silly nature and personally, I couldn't recommend it more if you just want a silly evening away from the binds of life in general.

Legally Blonde - The Musical runs at the Royal & Derngate until Saturday 21st October 2017 before continuing its tour. Details at https://www.legallyblondethemusical.com/uk-tour-2017/ 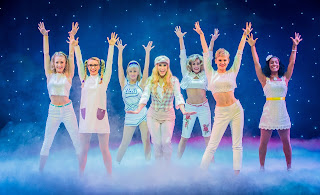