Review of Rules For Living at Royal & Derngate (Royal), Northampton 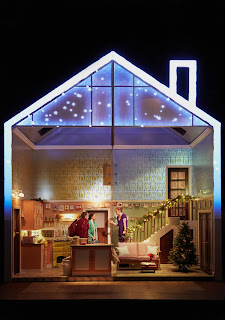 It is possibly a rule in life for a few in the audience for the opening night of Sam Holcroft's domestic comedy Rules For Living not to mention Christmas until December. Therefore anyone of such a persuasion might have been a little perturbed to be presented on the 13th September with, an undeniably brilliantly dressed, homely Christmas scene.

Opening up in glorious dollhouse style and on a gorgeous little hinge, this little home of living room and kitchen sets the scene for a typical family Christmas. Mother Edith (Jane Booker) welcomes her sons, Matthew (Jolyon Coy) and Adam (Ed Hughes) and their respective partners, Carrie (Carlyss Peer) and Nicole (Laura Rogers) And with a final dramatic arrival of father Francis (Paul Shelley), the scene is very much set for comic antics of the highest calibre.

The first thing you get from Rules For Living in the first few minutes is the arrival of one of the most brilliant, yet simple concepts I have seen for a while in the play. These are the rules for living themselves, signalled by dramatic sound effect and video projection (watch out for the clever colour coding of character dress as well). The first for Matthew of his requirement to sit to tell a lie has the very best impact, and immediately and rightfully has the audience in fits of laughter. While great fun comes from each of the others little rules (and beware for the fun escalation), Matthew's is the one that remains the most successful. However seeing an endless and quietly bopping Carrie also brings great value, especially in the drama of the second act.

The cast are all wonderful, Coy's Matthew, always happy to please as long as he is sitting down. Peer's Carrie is full of huge enthusiasm (and energy) as she brings a constant buzz to proceedings, especially when her rule is activated. The glorious Booker as Edith also buzzes around, calming her constant nerves as the only way she can. Shelley as Francis has little dialogue to put his character across verbally, but his few words (and even fewer non-swear words) have as much impact as his wickedly meandering hands. I can't help but think that Hughes gets the short straw as Adam with his rule of accents, which is mostly a little too silly rather than funny most of the time, however, he does absolutely the best he can with it. Meanwhile Rogers is deliciously wicked as the guzzling Nicole careering through marriage and child issues with a glass in hand. 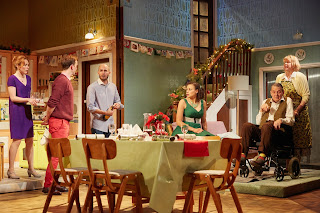 The second act is by far the funnier, although you might little suspect that with how slightly dark and uncomfortable the first finishes. While the rules themselves escalate and very occasionally create a little bit of entanglement for the characters (and can sometimes leave the audience needing to concentrate to get the best from it) it maintains a constant level of high entertainment. The incredible scene (you will know which I mean when it hits you, possibly literally if you are in the front row) is theatre staging of the highest order and rightfully got a round of applause on the evening.

It's not perfect, staging has its issues. From my seat slightly right of centre in row G, the arrival of Francis was blocked by a Christmas tree, and later when we finally settled down at the table (an always dangerous situation on stage), Francis once again was totally blocked by the back of Nicole through quite a long scene. However, for the best part, it works incredibly well and director Simon Godwin and his backstage team have to be applauded for making this challenging production work at all.

There is no denying that Holcroft has clearly been influenced by Alan Ayckbourn in the style of this play, and for those that have seen it, you might even think Season's Greetings a little. It also has Ayckbourn's classic emotional twists with Francis' illness and Emma (Siena Rista) and her problems with Cognitive Behavioural Therapy ("energy envelope" also sounds a perfect Ackbourn-ism). However to be influenced by one of the best is nothing to worry about, and Holcroft plows her own direction with this play and a central idea that anyone would have delighted in coming up with.

I have a rule in reviewing not to get too carried away with my stars and allow my heart to rule my head. If I was to allow the heart, this little piece would rule the roost of five stars. However, it's not perfect, as although I currently sit writing this I cannot tell a lie. However, the rule of this month's theatre diary is that you head to the Royal and sample this inventive and genuinely funny play before it heads off on its five stop tour.

Rules For Living runs at the Royal & Derngate until Saturday 30th September 2017 before touring until November. Details of the tour are here: http://www.ett.org.uk/whats-on/rules-for-living