Review of The Twits at Royal & Derngate (Royal), Northampton

February 17, 2017
I have been a fan of the macabre world of Roald Dahl for as long as I can remember reading, progressing through his world of enormous crocodiles, onto my most favourites, Danny the Champion of the World and Charlie and his two epic adventures with Willy Wonka. I even then became a grown-up reader of Dahl, where I found myself absorbed into his Tales of the Unexpected. He is without doubt a genius writer, but could those worlds translate onto the stage successfully? Matilda's success says so, as does the huge success of the Chocolate Factory production. At the helm of this production of The Twits (from the Curve Leicester) is the dynamic and so far for myself, utterly brilliant work of director Max Webster.

His pedigree of bringing challenging worlds to the stage was dealt with, with total ease in 2015 when the world of Dr Seuess' The Lorax brought colour, joy and musical extravagance to the stage of The Old Vic, and The Twits offers in places much of the same. However the big problem with The Twits is the thinness of the material. While our two lead characters Mr and Mrs Twit are grotesquely and compellingly created by both Dahl's work and the performers Robert Pickavance and Jo Mousley, there is simply not enough story in Dahl's book to create a production from. Leaving it at a running time of just over ninety minutes, it still requires a great deal of fluff to be added to fill the time.

That fluff though is probably the best part of this production, all mostly in the second act, where this show pretty much becomes full pantomime. The filler of audience participation works wonderfully and that audience, clearly enjoying every minute are more than willing to join in. This includes perhaps the most bizarre moment of audience interaction that you may ever see, and I would be loath to spoil it here. Suffice to say, I feel sure you will never have seen anything like it before.

While the material is thing, the production remains pretty solid. The leads are both full of the character of The Twits, portraying their grossness with surprising clarity on stage, full of the dangerous edge Dahl knew so well to tread without going too far. These paired with the five ensemble of Luke Johnson, Liz Jadav, Alex Chang, Charlotte Workman, and Jack Horner, who provide both the chorus, the animal characters and some impressive acrobatic skills, complete a very well performed show.

Max Webster's dynamic touch remains from The Lorax, while clearly on a budget compared to that and the show misses any of the stunningly catchy tunes that featured there. It may seem unfair to compare the two, however despite being from different authors, there are many similarities. Both have an underlying environmental edge, both are of course full of bizarre and exotic animals, and the world they inhabit also feels very similar. Sadly The Twits doesn't have the depth of story to work as a complete show.
Production wise, it is a relatively simple affair with Georgia Lowe's set providing all that is required. The design however does fall victim though to this having been clearly created for a larger stage than the Royal has to offer, so the Muggle-Wump's cage falls victim to a huge blind spot for many in the audience.

There were some great little pieces of incidental music from Dougal Irvine that enhanced the characters with their own themes, and I also loved some of clever use of lighting from Joshua Pharo. Who knew that fluorescent tubes could be used so successfully!

So definitely an entertaining evening for its target audience, as the younger members were certainly well into the show, especially in the second half when they finally got to fully join in. As for a show to cross the age gap though, it is clearly a little flimsy and while it keeps you amused at times, if you haven't got an under ten to take, you may at times feel seriously out of place.

The Twits runs at the Royal & Derngate until Saturday 18th February, 2017. 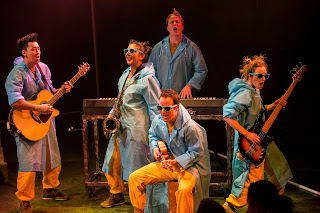