September 20, 2016
Recent political turmoils have been kind to Jonathan Maitland's biting and tremendously witty Dead Sheep. As 52% duked it out with 48%, it became the perfect modern metaphor of the lead protagonists of Dead Sheep, Margaret Thatcher (Steve Nallon) and Geoffrey Howe (Paul Bradley). It all appeared to have fell perfectly for this touring production.

Winding back a year and a half to Dead Sheep's debut in London, this play perhaps might have felt a little under appreciated. However, I think it is clear that this script has been doctored, like maybe many political papers of the past, to garner as much mileage from events since. There feels maybe much heavier undertones from the Europe material, that might not have originally got the same response. Mentions of a possible breakaway Euro skeptic party and Howe's line of the British public not being trusted to make the right decision especially, with the latter having quite a response from the audience of the night.

Bradley and Nallon are impressive as the friends turning enemies and Nallon is despite all logic to the contrary, a very good visual personification of Thatcher, creating a very fine balance between her womanly and her manly persona and never coming over too ridiculous. Bradley likewise creates the apparently harmless and obedient Howe, "If you say so", and much of the time remains as dormant and at heel as Summit his dog. This works all the better for the impact of that explosive final speech. Here Bradley is quite brilliant and despite cleverly being forced into a quiet corner by director Ian Talbot holds the scene brilliantly with the delivery of those defining words. A closer inspection of the actual resignation speech on YouTube (well worth reliving), shows that the team behind this production have worked hard to recreate it perfectly, with Nallon's Thatcher portraying the original postures perfectly.

While the two leads are superb, there is perhaps more joy to be had from the remaining cast. Carol Royle is a quite brilliantly loyal and emotive Elspeth Howe, as strong and "immovable" as the PM herself and quietly influencing on proceedings. However the driving force of the whole play comes from the trio of Graham Seed, Christopher Villiers and John Wark forming a sort of chorus to proceedings, bringing us the turn of the calendar and proving subtle stage hands. They bring also the bulk of the comedy to the play in their phasing in and out of the characters from history, so Wark rekindles much humour from his Brian Walden and Villiers brings a glorious sense of relish to the unsubtle and sweary Alan Clark. They also do subtle well, with Seed portraying a likable and conflicted Ian Gow, which heads towards that sad historical moment, given great care in its depiction here.
There are many great scenes within the play, from silly revelations of jumpers to a really brilliant telephone scene, performed with perfection and well worthy of the unscheduled round of applause. It all keeps moving along at a tremendously brisk pace with no breaks in scenes to stall events. Director Ian Talbot has certainly managed to make this as much a visual treat as much as a belly laughing one.

I did have a couple of reservations from the show, with the end seemingly coming just too soon. The second half is relatively short and does almost just stop after that speech and a very brief and awkward encounter at the Lords. It is true that it is hard to see how it could had added a little more of the history, and it does I admit close beautifully. There is also the nagging feeling that, by any nature of a piece written by an individual, this tells a one sided story. I can happily say that I am on the same side of Mr Maitland with his thoughts, but with nothing leaning the other way, it can't help but feel tremendously biased on the politics it tells.
However, this is clearly a brilliantly funny play with that perfect satirical edge. Much of the humour is obvious perhaps at times, and frequently comes from caricatures rather than clever jokes. However this sometimes is all you need from a play. For those that lived through the turbulent times, or for those unfamiliar, Dead Sheep tells this time of political fire in a excellently entertaining way.

Dead Sheep runs at the Royal & Derngate until Saturday 24th September, 2016 before continuing its tour. Details at http://www.deadsheepontour.co.uk/ 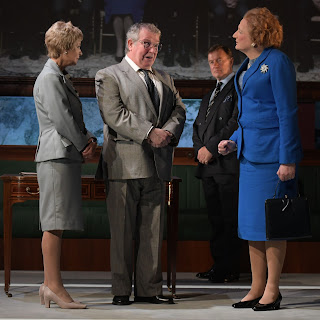