Review of Wind In The Willows by Looking Glass Theatre at St Peter's Church (Outdoors), Northampton

July 21, 2016
More possible years have passed than I wish to imagine since my last encounter with Kenneth Grahame's classic tale of the adventures (or misadventures) of a collection of lively, disturbingly human like animals. However as I watched James Smith's new stage adaptation of the tale, many things came swiftly back to me. Here was the classic messing about in the river line, there was the famous "Poop! Poop!", and there was Toad pretending to be a washer woman. The whole thing was pretty much back, if a little abridged to fit into its seventy minute running time.

That is not to say that this is a straight adaption for the stage, as it is at times more like a pantomime version of the story (albeit one without any "he's behind you!" business) in its absolute silliness. This is much in keeping of what you tend to get from Looking Glass in any case, a relaxed telling of a classic tale. It's what they are best at and it is very much not broke, so why try to break it.

There is however one vast difference for me with this production over the other children's shows of the last couple of years that have sprung from Looking Glass and that is the class of the cast performing it. Four of the best from this year's graduated University of Northampton BA Actors bring a new style and skill to the material offered.
Penelope May brings a highly energetic style to Mole, full of playfulness and with twitching nose investigates the new world she quite dramatically and literally pops into as the story opens. Of the four Mole is our way into the story as we travel with her meeting the assortment of characters, and Penelope has the exuberance to make our journey fun.
Hers and our first meeting is with a Ratty, performed with absolute style and sophistication by Sharni Tapako-Brown. We get the true cultured character from Sharni, as Ratty feels much more intelligent that ever before. Like all four cast members, she is captivating in her creation of the boat loving rodent.

No less captivating is Vandreas Marc, a genuinely inventive take on Badger, bringing as much of his own style to the role as that of Grahame's original wielding his stick as if its another appendage at times.
However of the four main characters, it is Stuart Warren who perhaps nails his role the very best. His Toad is every bit what you would remember, the impulsive nature, the superiority he feels, the mischief he causes which ends him in no end of trouble. Stuart really is Toad, and with the last three roles I have seen him in, a blessing to finally see him as a fun, bubbly character. He completes a genuinely brilliant cast.

There are a number of inventive moments within this new adaptation that also work really well; Vandreas' and Stuart's beat boxing/rapping field mice are a very funny moment; as is the clever boat journey, which works perfectly in the traverse nature of the stage. Finally who doesn't like a water pistol fight. Even if you get it right in the eye...

So a full of fun adaption of the classic children's story, which kept the audience of all ages interested and was performed with absolute brilliance by four superb young actors. If you have a child to take, or want to have a relaxing time to switch your brain off and relive your own childhood, you won't get a better deal at the moment, than heading to Looking Glass to see this show.
«««½

Wind In The Willows is running at St Peter's Church on selected dates and times between Wednesday 20th July and Saturday 30th July, 2016.
Looking Glass Theatre also has a website at http://www.lookingglasstheatre.co.uk/ 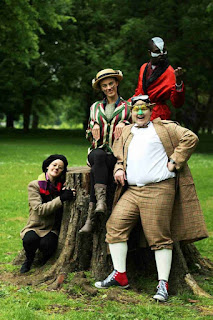