January 25, 2016
I wrote a tweet Saturday night following seeing this show: "For all the professional shows I have seen, there is nothing better than a night out watching amateurs do it for love and not loot."

This pretty much sums up my thoughts in general over amateur shows and why after over 180 shows reviewed on this blog, most of them professional. I still often find the most enjoyment from the amateur side. Amateur performers, like volunteers are a special bunch of people and their dedication can often trump the superstar that you might see treading the boards at the big theatres or the new breed of stars that sometimes prove that Britain's not always got talent, just ridiculous opportunity garnered from a television appearance. I quite often prefer amateurs and the University stars that are working hard on their courses and fighting for the chance. In my experience, that understudy is often better than the real thing.

So big thoughts, but it works well in leading to my review of the wonderfully entertaining charity concert I had the honour of attending Saturday night. Organised by performer Lisa Simpson in memory of her father to raise money for Willen Hospice, it brought together talent from around the county. This included performers from Northampton Musical Theatre Company (including their concert group), magician Clive Fletcher and special guest, the astouding talent of Joshua Daniel. Mr Daniel's Nessun Dorma was just one of many highlights from the evening, which included many favourites and a few lesser known musical theatre gems.

Standout moments of the evening included Lisa Simpson's Chicago number Maybe This Time, both suitable soft and powerful. This set the benchmark for a number of microphone busting performances. It was at times quite amazing the power of the singing. Jon Reynolds and Joshua Daniel's rendition of The Pearl Fishers Duet was also quite amazing and finished of the first section of the act one.

This was the perfect time for Clive Fletcher's first magic moment (in disguise for the first act).  Those who saw A Slice Of Variety at the Royal last year will be familiar with the performances. The second act painting trick however had the added interesting moment of not having perhaps the best audience participation moment. However Mr Fletcher dealt with it as professionally as could be expected from an awkward moment.

The second part of the music in the first act was opened with an admittedly nervous Tayla Sherman, but it was a lovely and tender little performance of Castle on a Cloud from Les Miserables. Next up saw Dawn Hall reprise 16 Going on 17, which had brought the house down at last year's A Slice Of Variety. This time her partner in crime was Jon Reynolds standing in for a sick Mark Woodham. He was the perfect foil for Dawn's hilarious performance. I absolutely loved Jon once again with Leisa Cooke and their Spamalot's piece The Song That Goes Like This. Highly entertaining! As was Ian Hammond-Stark's lively performance of Aladdin number Friend Like Me. The first act had a wonderful shop stopping number from star of the future for certain, Josh Wright. Both delivery and style of the piece made it one of the best of the night. A devilishly captivating performance.

The second act was opened with the NMTC concert group going through a whistle stop tour of musical numbers by Andrew Lloyd-Webber. Stirring and wonderful. Of the other performances in the second half, the highlights were Lisa Simpson and Ian Hammond-Stark's 17 and the former once again joined by Karen Mead in Man Wanted from Copacabana.

The entire evening though ended in a tremendous high with a quartet of songs from the magnificent Les Miserables. Closing with the superb comic Master of the House and the tremendously performed One Day More. It all ended the whole evening on an incredible high.

So a magnificent night and one I must thank Katie for giving me the heads up on, as I had missed this one and now very much would have been sad to have not been present. A musical evening of wonderful entertainment and congratulations to all involved and a very special congratulations to Lisa Simpson for organising the event.


Performance reviewed: Saturday 23rd January, 2016 at the Cripps Hall Theatre, Northampton.
This event was a special one night performance in aid of Willen Hospice. For details of the hospice, see their website at http://www.willen-hospice.org.uk/ 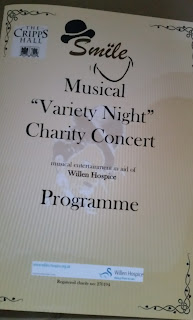