Review of I Have Been Here Before at The Playhouse Theatre, Northampton

December 05, 2015
I had my very first experience with J. B. Priestley in September this year with the smart and stylish BBC production of An Inspector Calls. Therefore I was greatly looking forward to seeing the Playhouse Theatre's production of Priestley's play I Have Been Here Before. There is a surprising similarity with An Inspector Calls mysterious Inspector and this plays Dr Gortler, both arrive unexpected and have a dramatic effect on every other single member of the audience.

Playing Gortler is Graham Follett, with the same solid German accent he confidently had in The Dame Of Sark. I commented in my review of that, how much of a star he was with the controlled but very softly delivered nature of his lines. In this he was once again the same, pulling the strings of all the other characters via Priestley's fascinating script, but delicately.

Follett's portrayal actually sets the pattern for everyone in this production as it all feels one of the more naturalistic plays I have seen. While much perhaps comes through the words of Priestley in just writing lines that ordinary folk would say, there is also a lovely style to all the actors in this production. This is very evident in Tony Janney as Sam Shipley and Maggie Holland as Sally Pratt, the two inn keepers that you could very imagine being real people as you stepped off the moors to try and find a bed for the night. Whether you have Maggie Holland putting on the posh telephone voice for potential customers, or Tony Janney delivering his lines in such a tremendously calm approach you think he might fall asleep at any moment, you can't help but think for a bit, these are just real people going about their business.

The three other characters and the recipient of Gortler's plans are the medically resting teacher Oliver Farrant (Shaun Milligan), and husband and wife Walter Ormund (Victor Guse) and Janet Ormund (Juliet O'Connor). Their lives weave together to create the eventual and surprisingly fast developing final acts. It is perhaps a little bit too fast and contrived at times and maye doesn't quite have the payoff that An Inspector Calls has, but the path there is exceptional.

Shaun Milligan is clear and crisp in his portrayal of the well spoken teacher, who while resting finds himself in the middle of an unexpected turn of events. It was great to see Juliet O'Connor for a fourth time, but more importantly for me the first in a predominantly serious role. As before she was very good value, although I will say that I have enjoyed her comedic performances much more. Finally Victor Guse is a tremendously solid presence, happily knocking back the alcohol but holding it like no other Shipley has perhaps seen, but still staying with it to witness his life unravel over just two days.

Production is once again lovely in the glorious compact Playhouse with the most wonderful set from Mark Mortimer. Magnificently evoking in such a small space the welcoming sitting room of the thirties guest house. The single set play allows great concentration on this and also allows director Corinna Leeder to keep everything moving seamlessly. I particularly loved the simple act changes and menacing clock music between them. That part between act one and two was so simple but so very effective.

So again a lovely little production from the Playhouse and very well received from the appreciative audience. Going to the Playhouse always feels unlike any other in Northampton, in that you feel you are attending a little production in a quaint little village somewhere. I really do enjoy seeing what they have to offer and I look forward to the 2016 season with relish.

Performance reviewed: Friday 4th December, 2015
I Have Been Here Before continues at the Playhouse Theatre, Northampton until Saturday 5th September, 2015. For full details visit their website at http://www.theplayhousetheatre.net/ 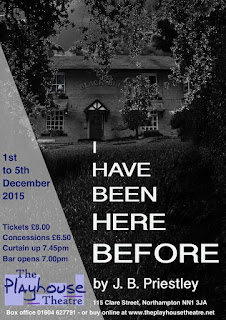