Review of Feast Of Fools Storytelling #8 - Open Mic at the NN Cafe, Northampton

December 03, 2015
The eighth Feast Of Fools storytelling event was an Open Mic night and for me since the very beginning these have always been the most entertaining. The guest nights have always been of huge quality, watching true masters of their art in action. However for me, variety is that spice and that is where my love of the Open Mic comes. There is always something truly different ten minutes away.

This Open Mic night was without any shadow of a doubt the best and most packed to the gills with talent with both professional and those wonderful, but not quite professional tellers in action. During the evening ten performers took to the stage and each brought something unique to the evening.

Our resident host Richard York began the evening with some torturing of an innocent animal to make sound (yes my favourite bag piping, lovely!) and he launched us into the evening with a tale involving a cat licking poo off itself and us in the audience singing in Christmas with a variety of farmyard animals. I could baa-ly believe what was happening.

Stephen Hobbs continued the Christmas theme with his rather surreal tale of Santa crashing into the jungles of Mali (?) and a journey to the land of Blighty and the cold of Southampton. Jo Blake-Cave was third up with a tale involving mice and a good bit of drink. I have extolled how impressed I am with Jo before on my blog and even in a short ten minute segment, the performance style is really rather impressive and quite captivating to experience.

Next on the bill was Sue Martin and official winner of the first bad/good joke of the night in her tale of an accident involving Santa and a camoflage skateboard. Yes that Santa Clause joke was indeed a so bad, its really quite good joke. It wouldn't win the evening though as Dave Blake was on the bill,

Next up was Clare Murphy, the first of two new faces on the night. Direct from North London I believe, although my hearing senses suggested originally somewhere else. The Christmas theme was dispensed with, and happily for me as it was only 2nd December in her tale from ancient Japan. It was one of a few on the evening of tales of a storytelling theme. This time a battle between a teller and a katana grand master. I have to say that Clare Murphy was one of the star points of the night in a very star packed evening. Her presence and movement on stage in the telling was superb and extremely funny and I hope that I get to see her again soon. Make it so!

The interval saw a very professional raffle take place where these: 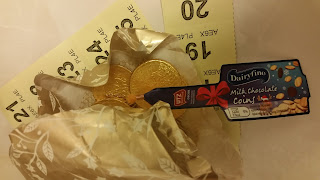 The second half was opened with "Mischief! Mischief! Mischief!" as Red Phoenix told a tale of a wicked witch taking the telling of stories and poetry away from the populace. Once again it was a wonderfully dynamic performance. Following Red Phoenix was the pain of Dave Blake and his puns. It was of course not pain really, leaving me removing my glasses to wipe tears away is always a good sign and Mr Blake, like his daughter, has never ever left the audience disappointed. I can't remember what the story was about really, something about the horrors of 1947 snow and a man riding a horse I think, but oh my god was it brilliant.

Following that was the second new performer to me of the evening, Marion Leeper all the way from Cambridge and bringing us back to a less pun heavy world with a more traditional tale. As it turns out she was the perfect bridging between the two strange worlds of Dave Blake and our closing performance of the night, Lisa Shepherd and Tamsyn Payne.

I make no bones about how brilliant I think Lisa is and combined with Tamsyn, who had just made her storytelling debut a month before, we were treated to a vivid retelling of the Billy Goats Gruff. Tamsyn made a wonderfully demure Troll, while Lisa spread her talent across the three very different goats. It was all rather wonderful and downright surreal, which is just the way I like it and it magnificently closed the best Feast Of Fools yet.

The news that 2016 will suffer some potentially major changes to the Feast came as a surprise, however this group must live on as it going from strength to strength and I for one am glad that I have witnessed it grow from that relatively quiet first night into the wonders it now is. See you all next year!

Performance reviewed: Wednesday 2nd December, 2015 at the NN Cafe, Northampton.Feast Of Fools is held on the first Wednesday of each month at the NN Cafe, Guildhall Road, however arrangements are not certain for 2016, so to keep up to date see their Facebook group at https://www.facebook.com/StorytellingFeast and Twitter @FOFStorytelling 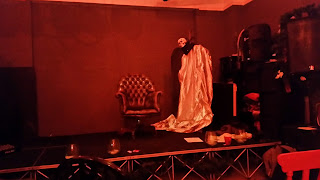