November 09, 2015
Last year in my review of the Ghost Walk I made it clear that I wasn't the biggest believer of ghostly apparitions. So I returned for more this year, not to be swayed into a believer, but to experience the best part of last years walk, the historical information. Rather thrillingly (and I take no credit. Or do I?) the ghost walk had not only dispersed of the slightly incongruous theatre performance filler, but also upped the ante on the history lesson.

While ghosts were still of course on the menu (poltergeist stew anyone?), this year we also had the chance to learn a great deal more of solid historical information about the main four venues we visited. Our tour began at St Peter's Church, were we learned a little about the history of the place and who was buried there. We also got a chance to explore in the dark for a few moments. 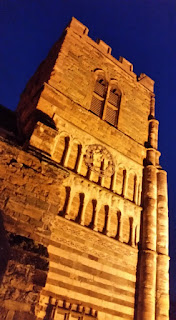 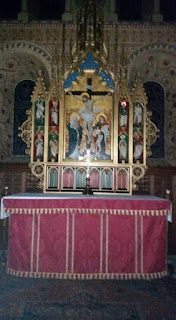 The church itself is an amazing building and it is a shame that is has been so rarely used for the last twelve years. However Looking Glass themselves are set to change this dramatically now that it is to be their new performance space.

Our journey then took us onto somewhere I have been before, but not for sometime; Castle Hill. Where indeed there is a mound of earth which barring a moved gate is pretty much all that represents Northampton's very long gone castle. We were told of a lady with a candle who is supposed to walk the area in search of some also long lost item. Some of our party saw an apparition apparently. I myself could not comment.

The third main stop came after a brief detour to outside a car park which is supposed, and very likely perhaps to be a burial ground for victims of the Black Death. However onto Hazelrigg House, now the base camp of Looking Glass and somewhere I had some brief experience with earlier in the year. Here we were told of many supposed experiences of ghostly moments in this well regarded haunted house, once visited in all belief by Oliver Cromwell and is a survivor of the Fire of Northampton in 1675. This was to be the main base of some ghostly theatrical moments, those of which as a wise young lady with us said, were more scary before they started moving. It is an amazing building with much history and great, albeit briefly to be in there again.

The final stop on the tour was the Black Lion pub where we visited a function room and more interestingly the cellar and quite a small but creepy place it is. We were plunged into darkness twice in the Black Lion much to the consternation of a couple of the party, however no ghosts sadly made there presence felt or were heard on the recording I made on my phone.

Once again a more interesting tour for me over the ghost walk part, but the ghost parts were wonderfully presented as in 2014 with great period costume and make-up. Part of the interest also of a tour is the company we keep and those on my particular one were interesting and also interested in what they were being. The included the aforementioned scared/not scared young lady, and as well also great credit to the stick wielding gentleman who completed the tour fully despite there being some challenging access moments at the Black Lion, where I showed my limbo prowess.

Super stuff once again and excellently and pleasantly presented by our guide James Smith. I look forward to where the Looking Glass shall be taking us for the 2016 tour.