Review of The ELO Experience at Royal & Derngate (Derngate), Northampton

September 25, 2015
Last year I attended The ELO on courtesy reviewing tickets for an official job for The Public Reviews website. Due to this I had to make a somewhat professional account of the show. I attended the show again yesterday as a paying guest and I write for my own personal blog, so expect frivolous.

In my "official" review last year (here) I made no mention of the fact that I was a huge ELO fan long before I found myself seeing the simply superb ELO Experience. This year I was once again joined by my companion of last year as well as a couple of pensioners, including a seventy-nine year old teenager and ELO superfan. It was all to make a most perfect night as once again the ELO Experience, led by our Jeff Lynne, a.k.a Andy Louis provided perfect representations of those classic tunes.

In a more relaxed state with no pressing need to make mental notes for review, I felt the whole experience an even more joyful affair. This is what truly comes across from the ELO Experience. On that stage are eight people who visibly are loving what they are doing. They have an infectious repartee with one another, there is fun on their faces. This to the outsider appears to be more than a job.

The show itself was basically the same as that of last year, with I believe (memory serving) a couple of different songs. Everything was there once again from the very classic songs as well as including a few of the same jokes from last year. However it mattered not, this was just pure musical joy and more of the same, was always going to be just more of the fun.

So once again we had the delightful Lego film during Horace Wimp, the uplifting Olympic footage during Hold On Tight and my very favourite ELO song Livin' Thing once again closing the first half.

The second half as before became a more relaxed affair with many up and dancing at the sides and in the boxes. I didn't this year detect a jiving couple during Beethoven, but there did seem to be more £20, sorry quid glow sticks on display. I know that I was more relaxed, and yes therefore more embarrassing (sorry once again you know who). I was just simply enjoying every minute. 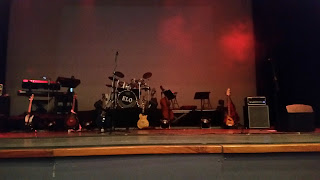 As I know from the company I kept, music can stir memories like no other. So whether they be bitter sweet, flash backs to your youth, or just unadulterated madness, the ELO Experience brings it in the bucket load.

The best evening I have spent in the Derngate auditorium to date full stop and I am ready, just ready for the next time already. A simply must see if you are an ELO fan, and very much maybe a must see if you are not. I have no other way of recommending the ELO Experience any higher.